There is a very famous, and one might say, really fascinating anecdote in the Preface of Judith Butler’s now-classic academic monograph Bodies that Matter. The author recalls how, it the times of working on the book, the following question was formulating to her: “What’s with the materiality of the body, Judy?” Later on she concludes that the thought of materiality invariably moved her into other domains, which presumably evokes many analogues in the viewer of this recent inspiring exhibition here at Platán Gallery of the Budapest Polish Institute. 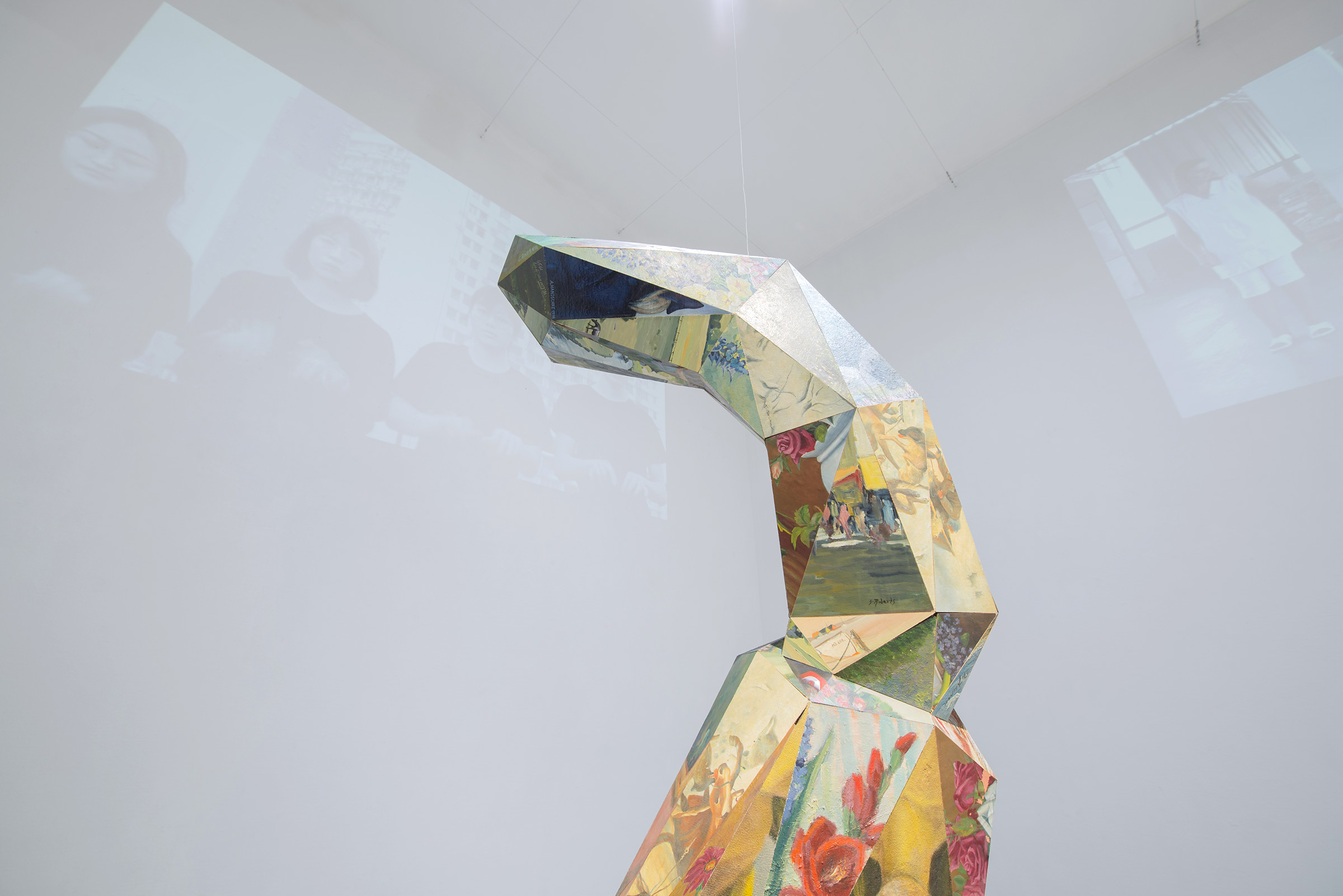 We should at least borrow the metaphoric subtitle of Butler’s book, which is “On the discursive limits of sex” (as the opposite of gender) for the new joint display called Immaterial, works of Anna Fabricius and Janek Tomza. 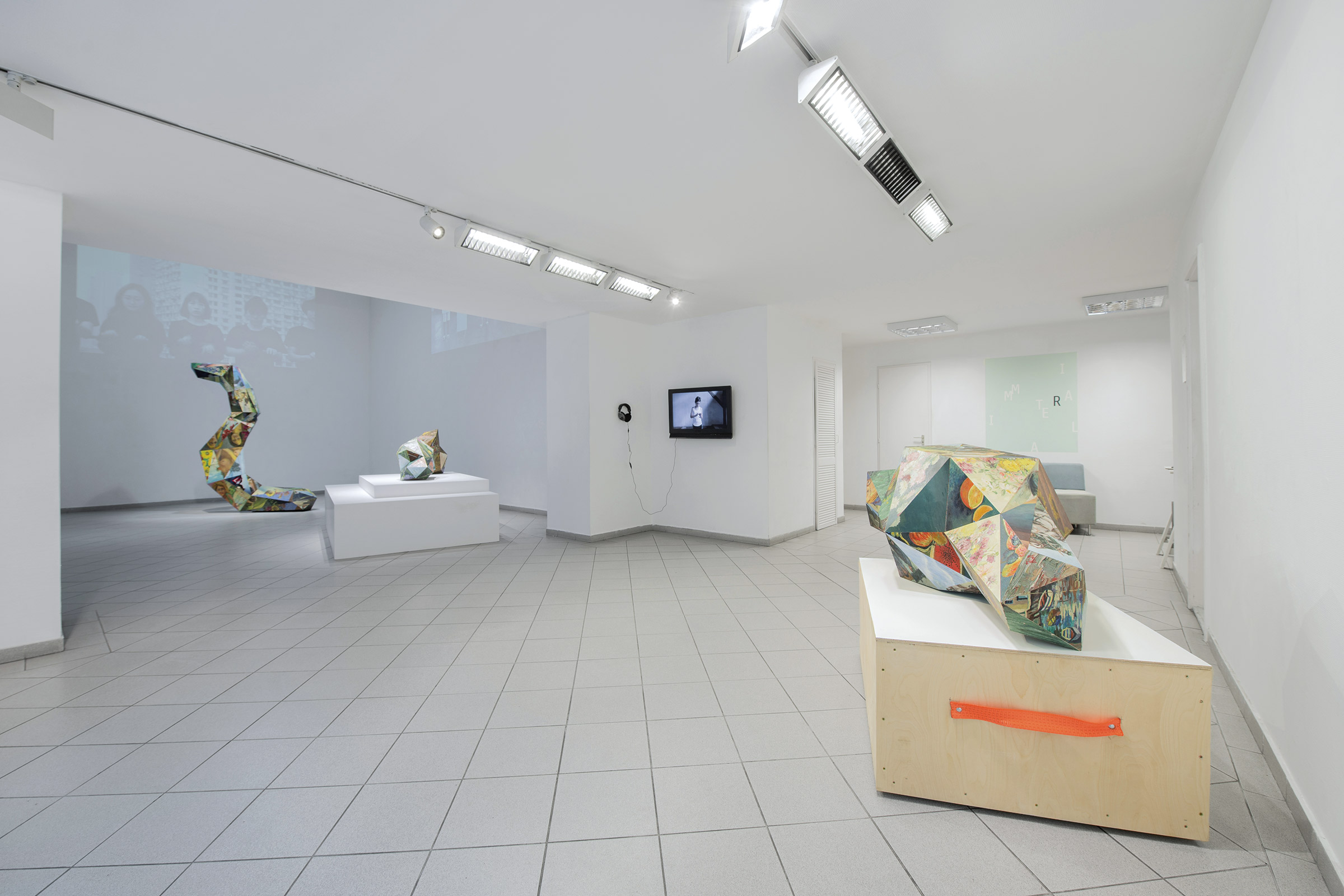 These artworks are of course not questioning (only) the limits of sex, but the limits of – well, materiality – and maybe even more than that, the limits of presence, the limits of technology and the limits of the body as a social construction. At the beginning of the 19th century some serious anthropological changes happened caused by theoretical and scientifical progress. The methodology of reading was impregnated with optical function while the interpretation of the body evoked mechanicity. These complex processes are still effecting the conception and design of bodies and identities in the 21st century, either in consumption culture and artworks. Said shifts are merging into one discursive imprint at Immaterial’s very material space. 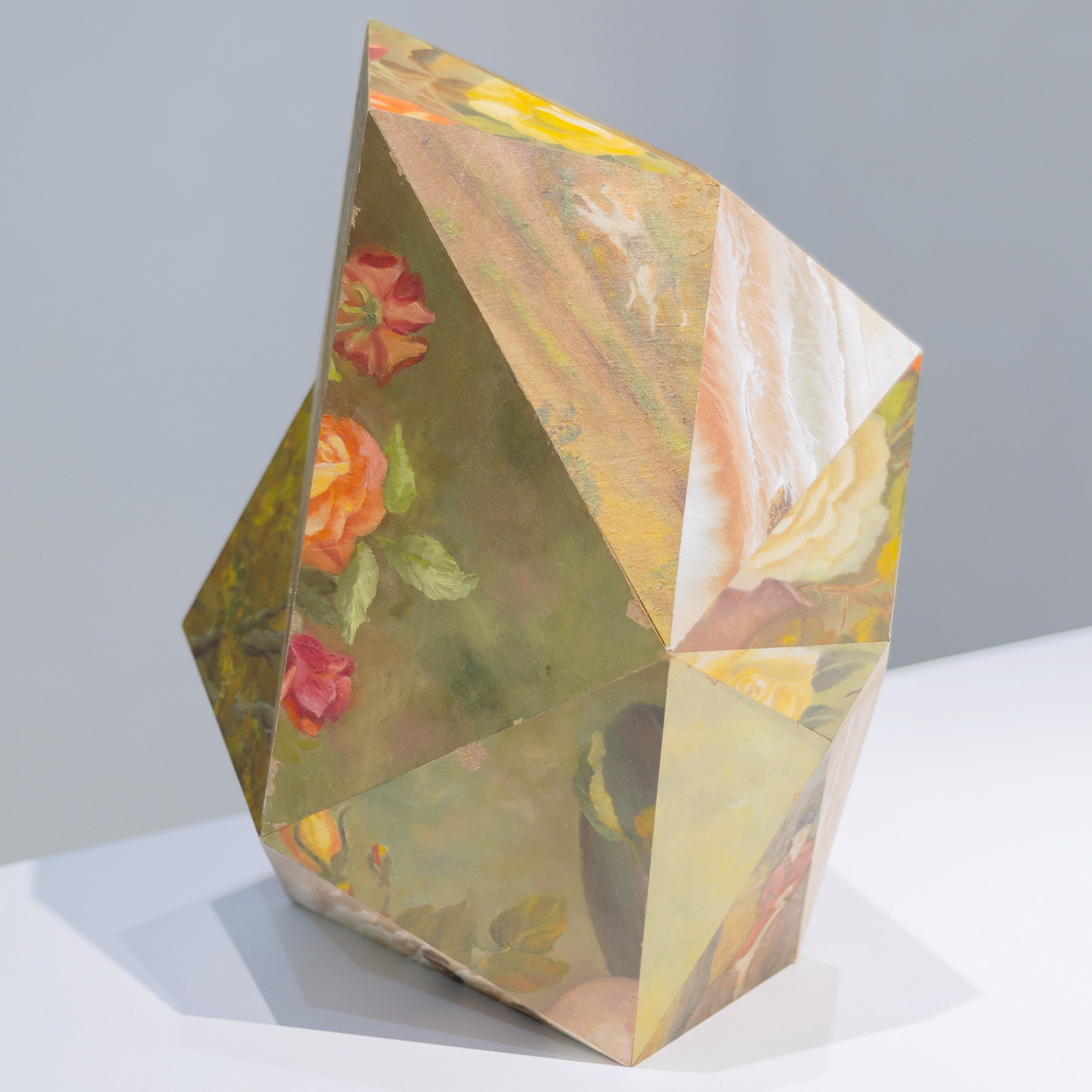 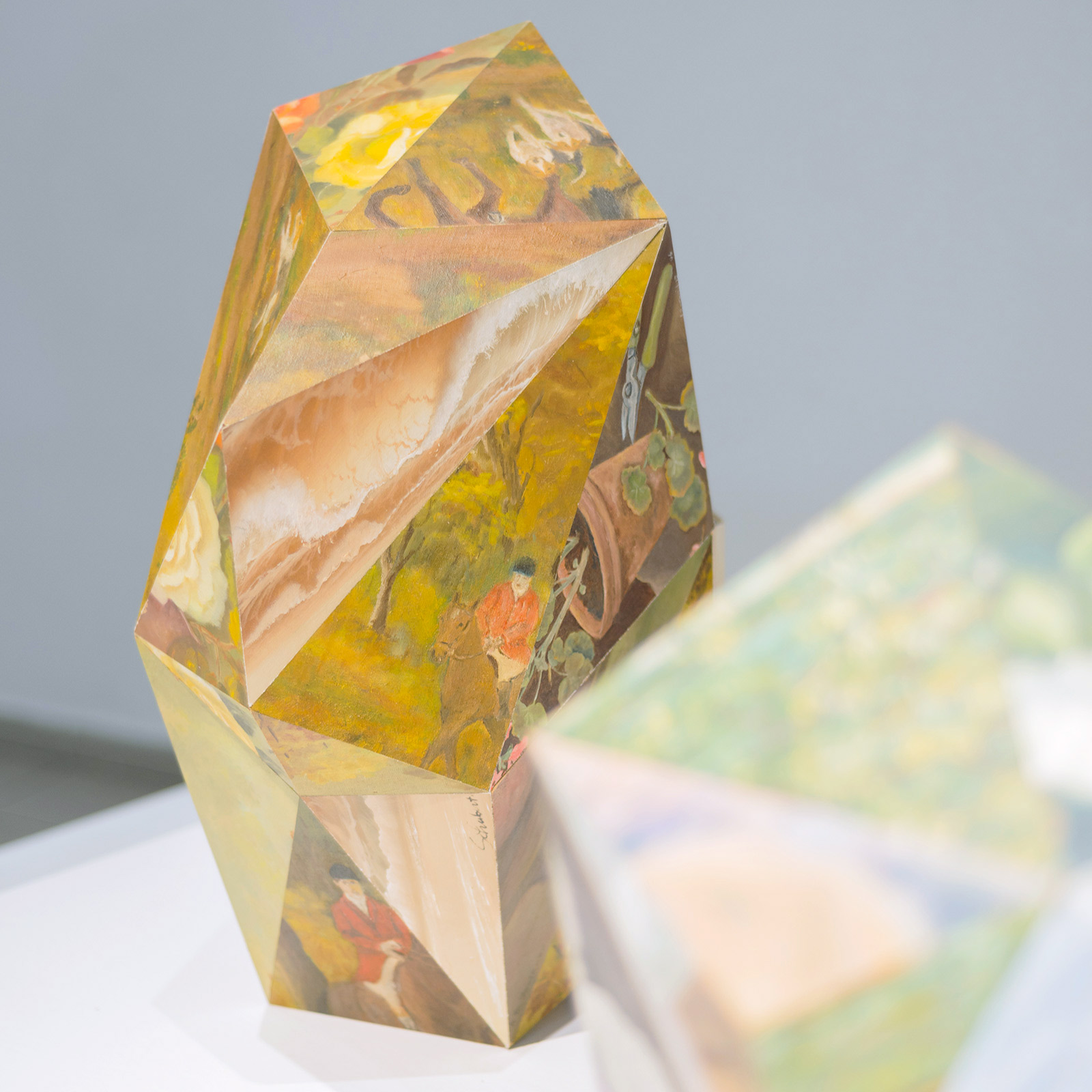 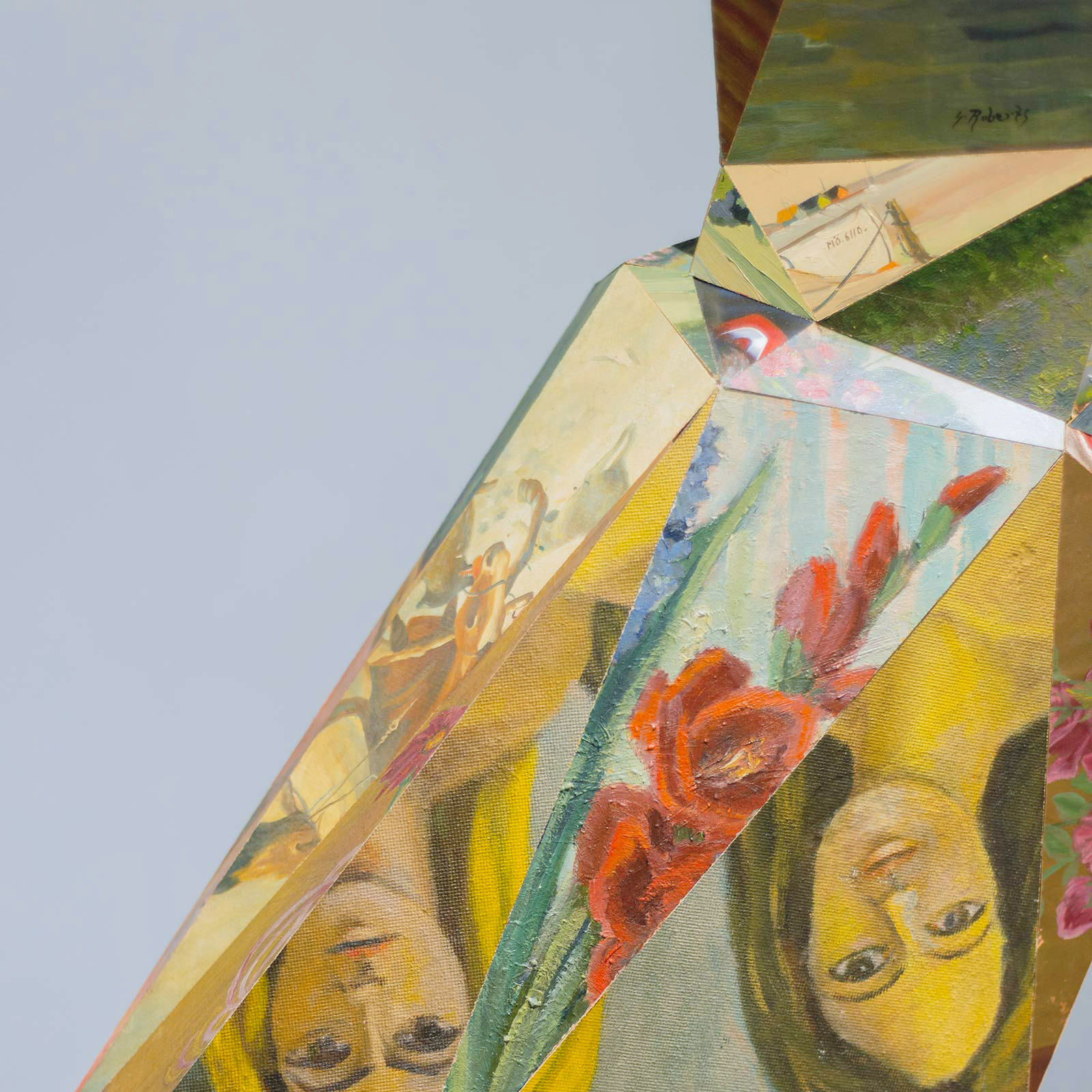 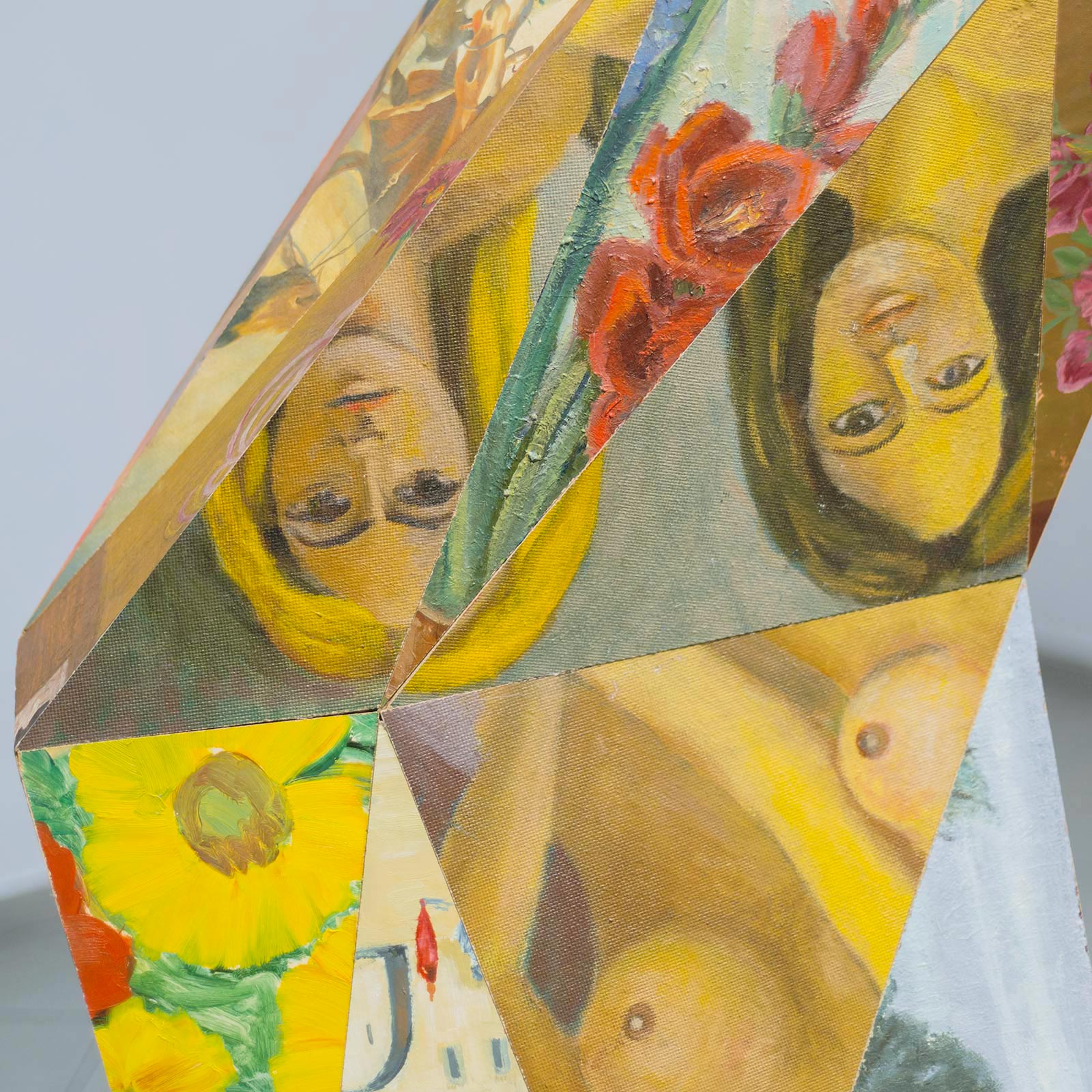 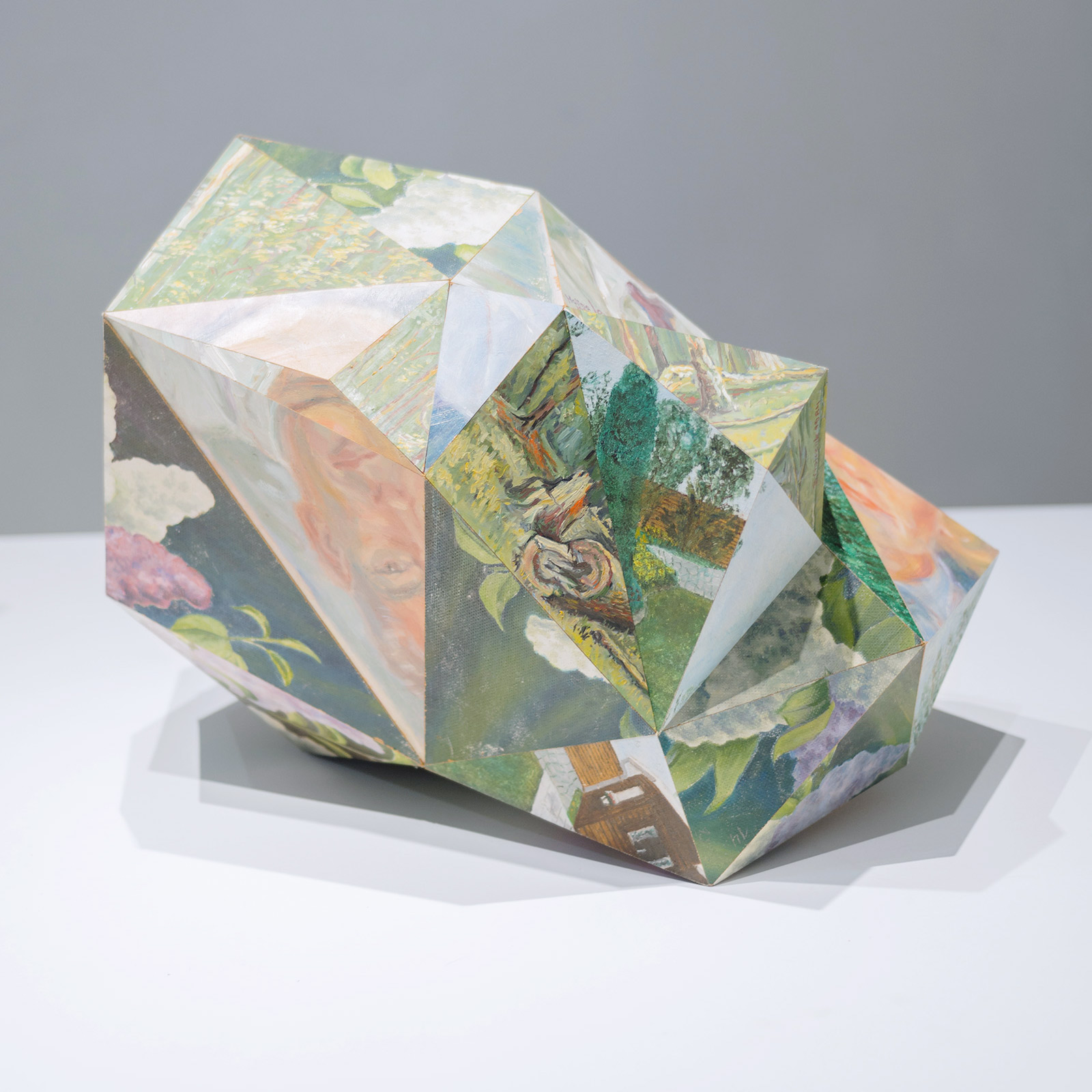 The main description of the exhibition proposes an idea from Victor Buchlin’s 2016 book An Archeology of the Immaterial which examines the denial of materiality within contrasted social systems, and I quote: “A common feature of both post-industrial capitalism, Christian asceticism and reformation, as well as Leninism that nonetheless unite in making sure that matter always draws the shortest straw, and traces this denial to a particular view of the body – as a disposable vessel for the soul.“ In this case, archeology is understood both as a strategy and a point of view, in which these installations can be seen with kaleidoscope eyes. 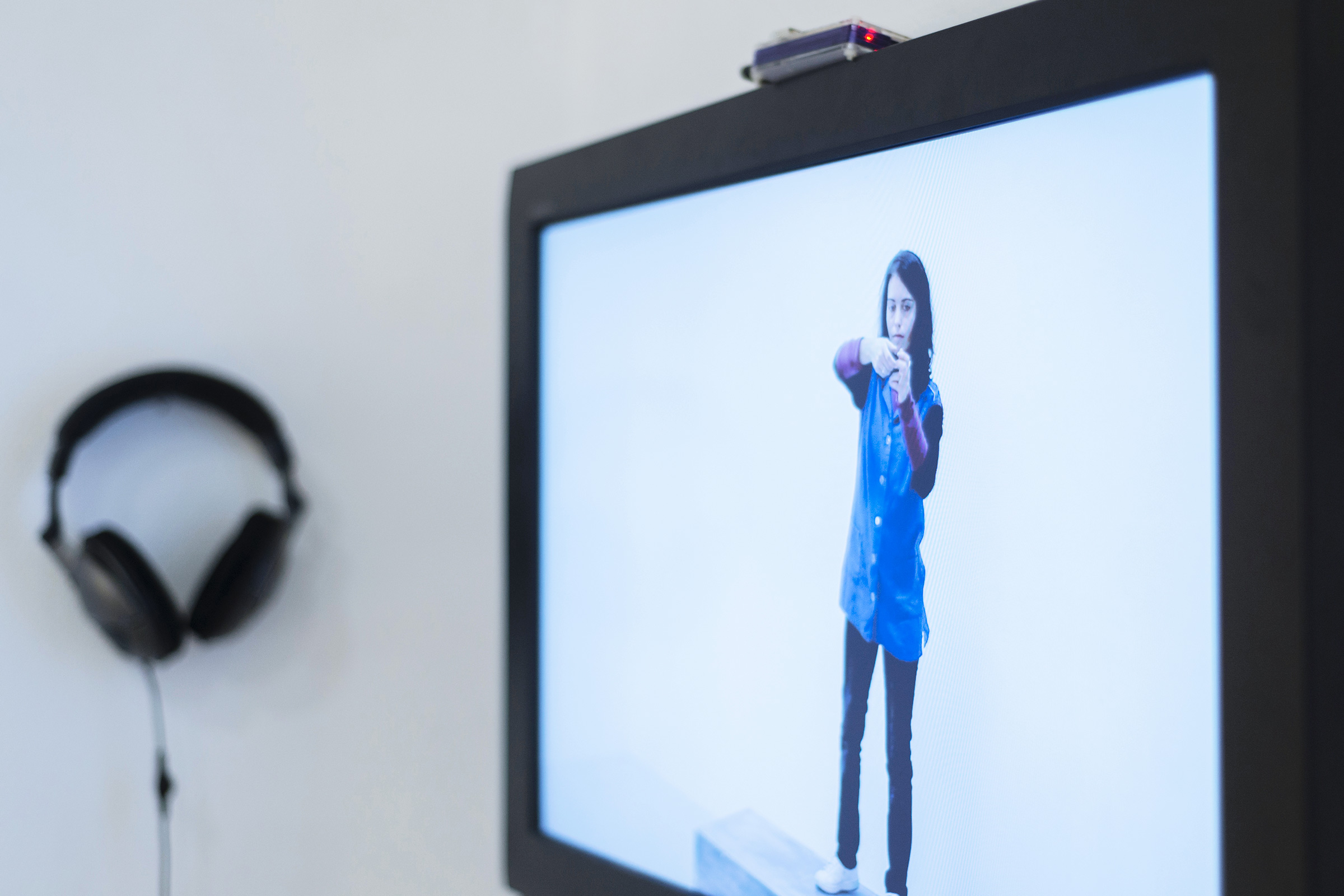 Within the video installations of Anna Fabricius and Janek Tomza’s series – that turn patterns of flea market paintings and figures of computer games into colorful sculptures – social rivals with individual, real rivals with virtual, fluid rivals with static, artistry rivals with trivial, and above all, they offer themselves a technological and a cultural analysis. To understand a society one should understand contemporary cultural effects, and vice versa.

It is a cliché that the medium essentially determines the quality of the artpiece. However in the case of digitally rooted pictures and artworks we have to put an emphasis on that sentence. It is not a coincidence that technological artwork is rewriting our culturally ingrained habits and stereotypes by integrating mediums to fine art which could be known only as an entertainig or popular function before. It confirms that the idea of subjectivity is highly and essentially determinated by the technological connexion which is characterizing by the actual age and implies that identity and interpretation could only partly be substantive because of the effects of the technological background and mechanical environment they are constructed by. 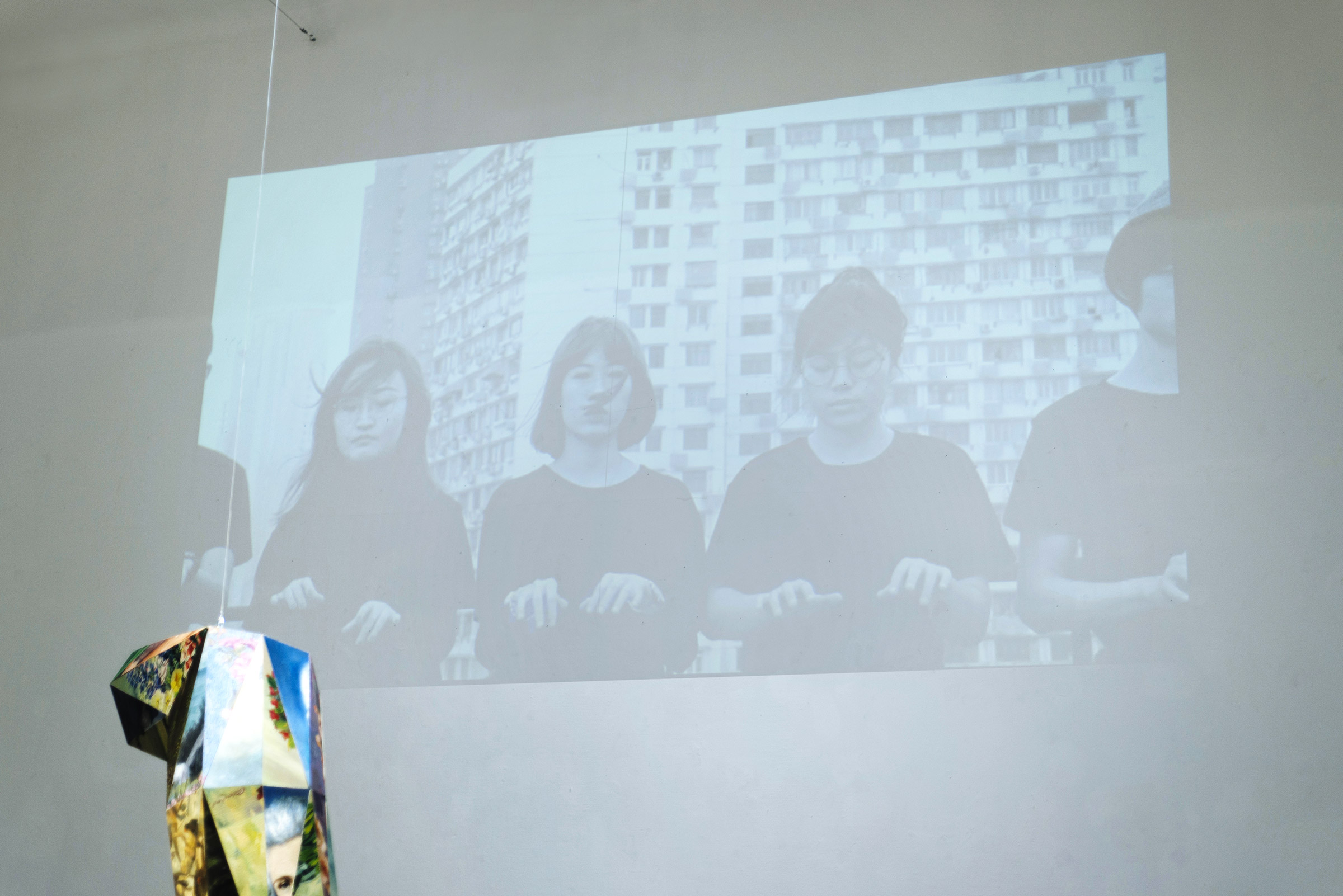 Just like objects, people are bodies themselves, and they have bodies as envelopes and barriers. We often tend to forget how easily and in how many ways a person, an object, or even an idea can be broken. That is not what is happening here. New spatial stories are rising from virtual ones, social strategies from individual ones in the artworks of Anna Fabricius and Janek Tomza.

Thank you for the opportunity to think about Immaterial – the phenomenon and the exhibition. I congratulate the artists and wish you all a pleasant, material presence in Immaterial. 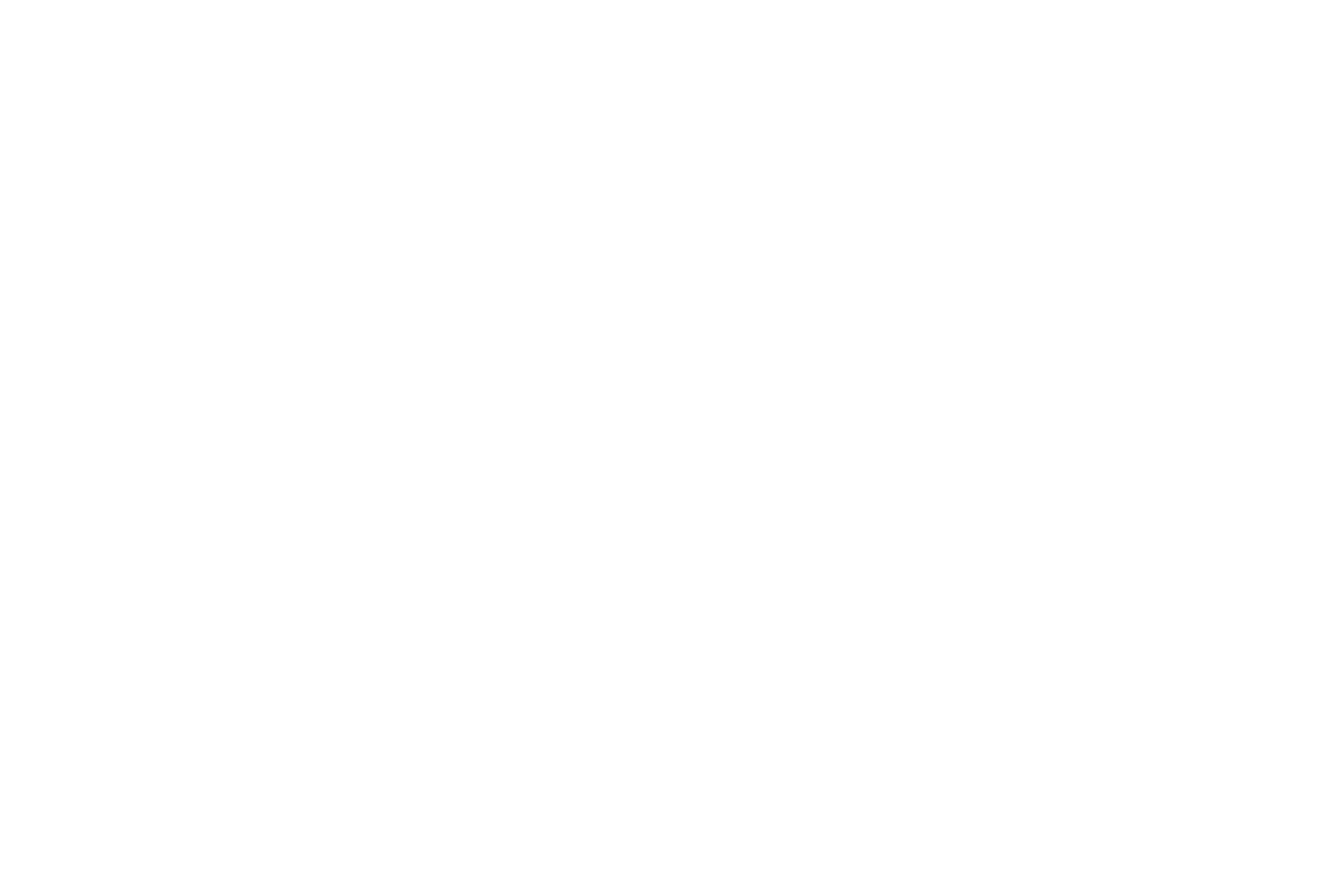 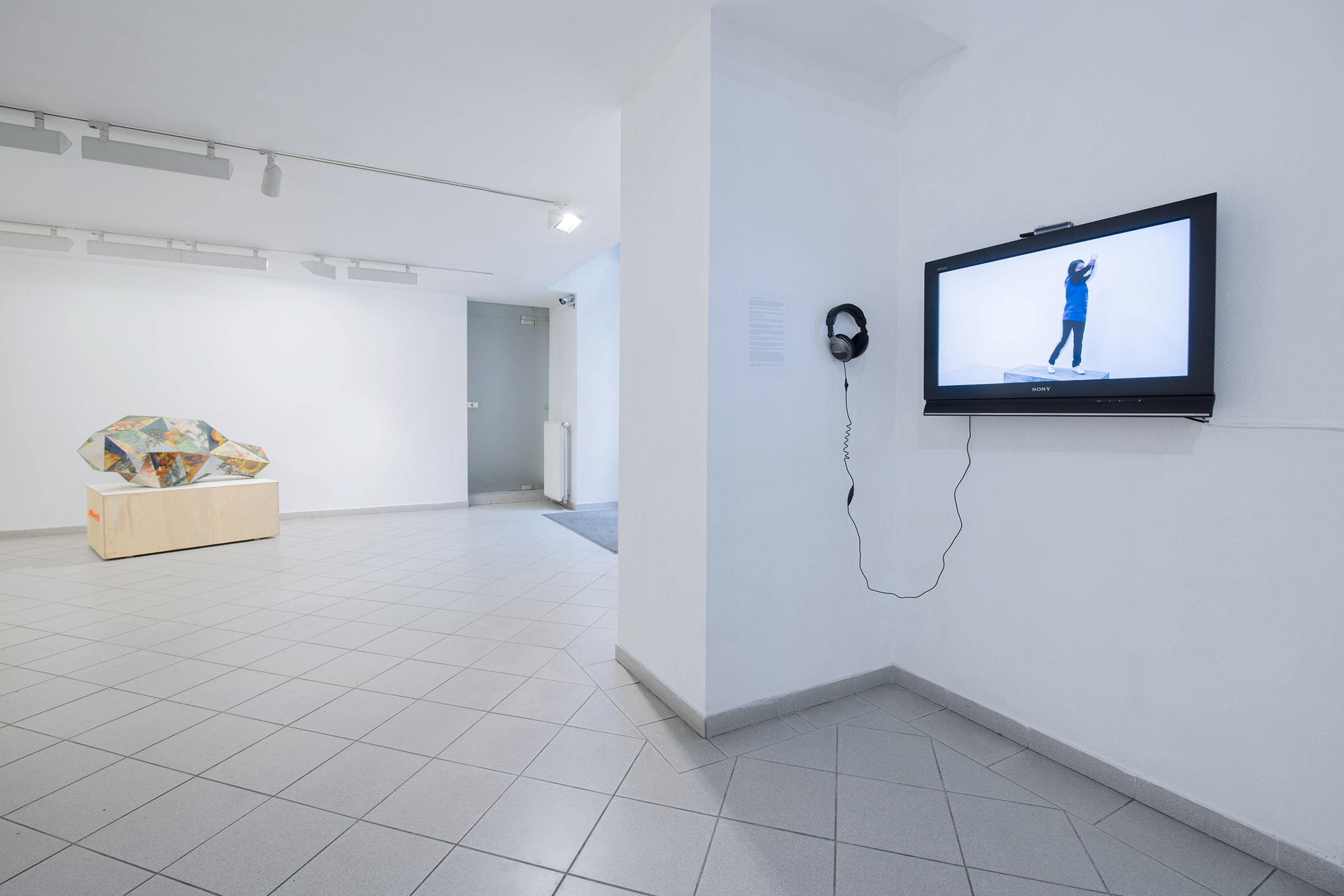 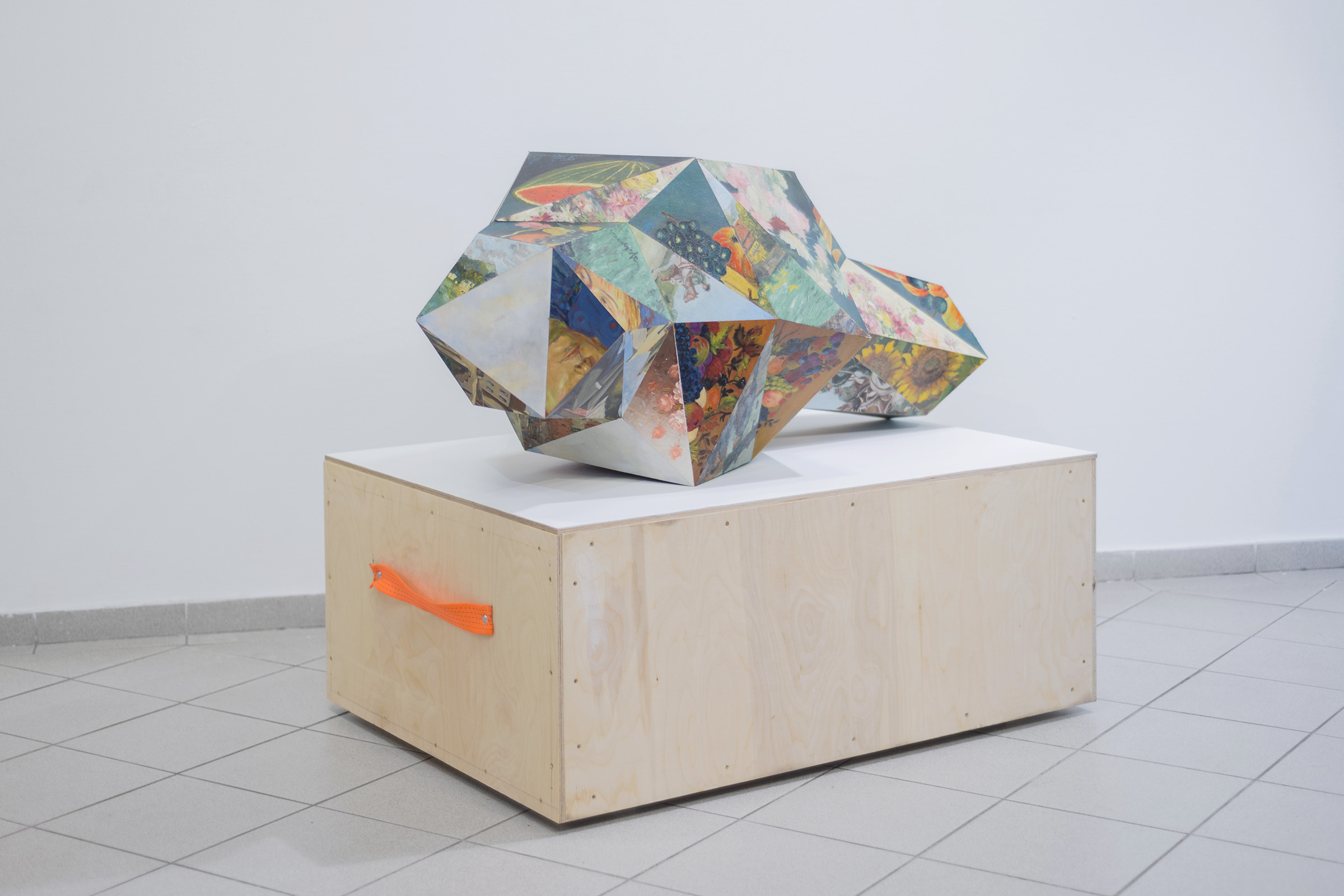