Melancholy of the Disconstructed Meaning

In his exhibition titled the Melancholy of the Disconstructed Meaning, Ádám Albert created an ensemble where he models the way in which objects with modified meaning and handicraft techniques become saturated with conceptual meaning. Installations constructed from handcrafted ready-made objects which have lost their function and new objects manufactured with the help of traditional techniques guide the viewers through the conceptual creative process: starting with the loss of function and meaning, through the building up of tarnish and value, to the adding of new meaning. Through the case studies of artworks, the transformation (construction, reconstruction and disconstruction) of meaning is displayed in the memory of these objects: the horse once used for royal representations becomes an anatomy lesson, the sensational revolutionary modernist technology becomes DIY raw material, the social-realist display cabinet becomes an item in a museum, and handcrafted objects become ornaments in middle-class homes. 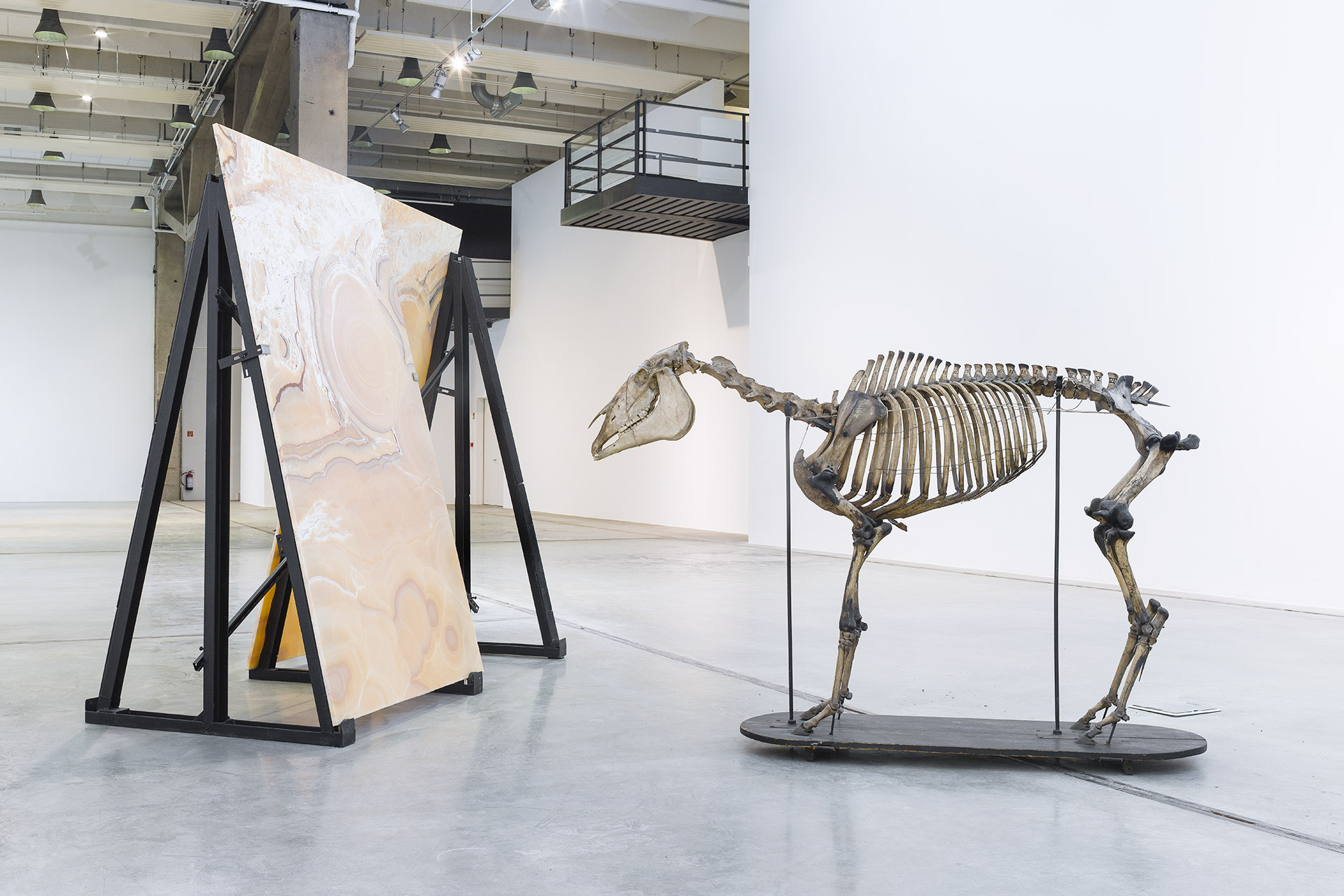 Bertalan Székely, who studied at the Academy in Munich, became an instructor and later the director of the Royal Academy of Drawing in Pest (today the Hungarian University of Fine Arts) at the end of the 1870s. As a professor of anatomy, he laid great emphasis on studying the movement of horses, he bought a complete horse skeleton for the academy. Nevertheless, he also studied the contemporary revolutionary photos of motion by Eadweard Muybridge and corresponded with Étienne-Jules Marey. The instructional horse skeleton, which still exists today, poses the question why, apart from certain zoetrope experiments, it was essential for the students of the academy to study horse anatomy. In this decade, impressionists in Paris painted one of the ultimate symbols of industrial capitalism, train stations; at the same time, important historicising accessories of 19th century royal representation and the key to receiving state commissions ensuring secure income were still equestrian statues (Habsburg dynasty). Since reigning a horse was the allegory of good government, it played an important role in imperial representation. Bertalan Székely’s horse skeleton, in Ádám Albert’s artwork The Narcissism of Power (Bones of Buchephalus), stares into a three meter tall smoothly polished mirror-like onyx slab: the power symbol fit for art deco skyscrapers. The two onyx slabs are masons’ monuments of self-reflection, identification and mimetic/power representation. 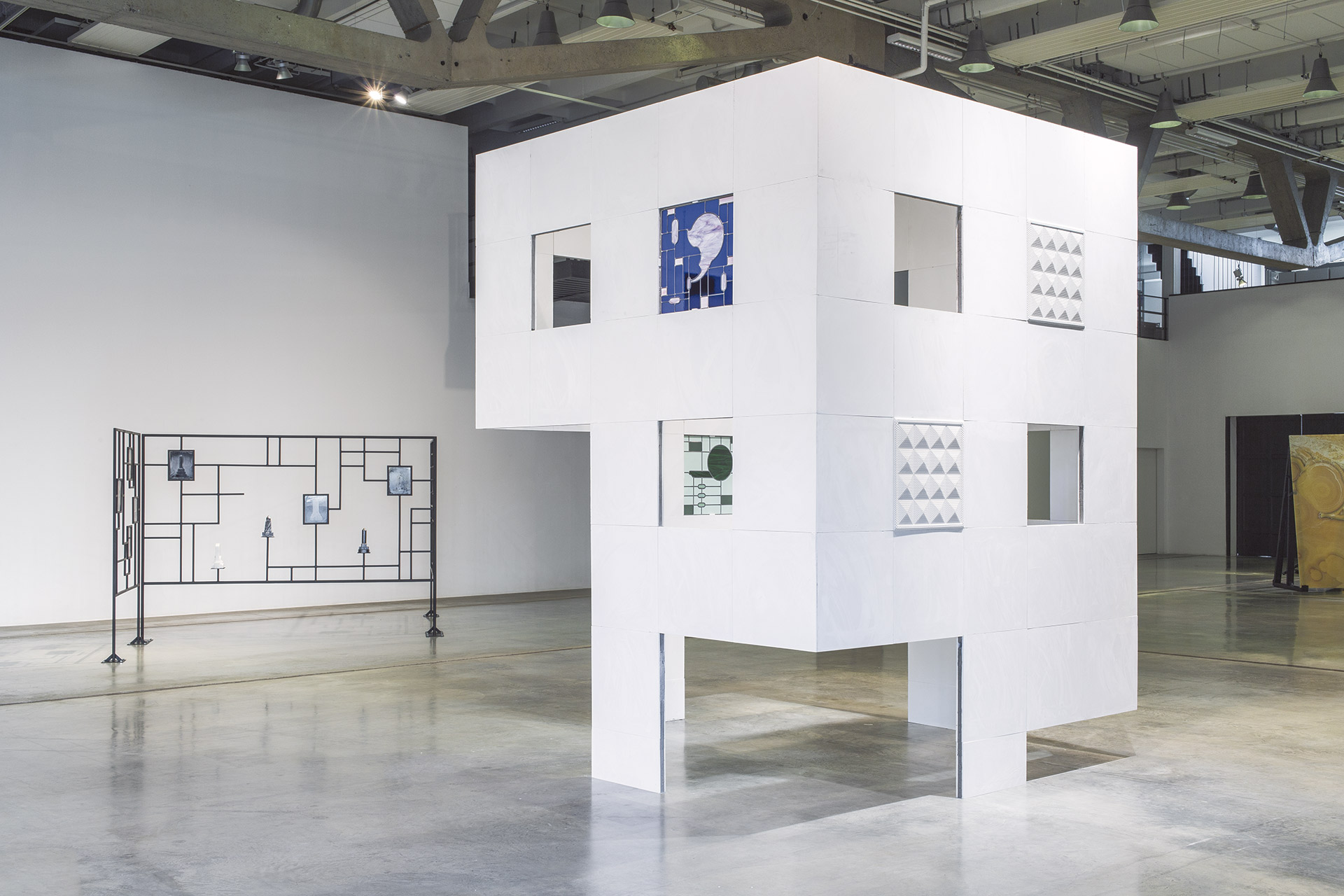 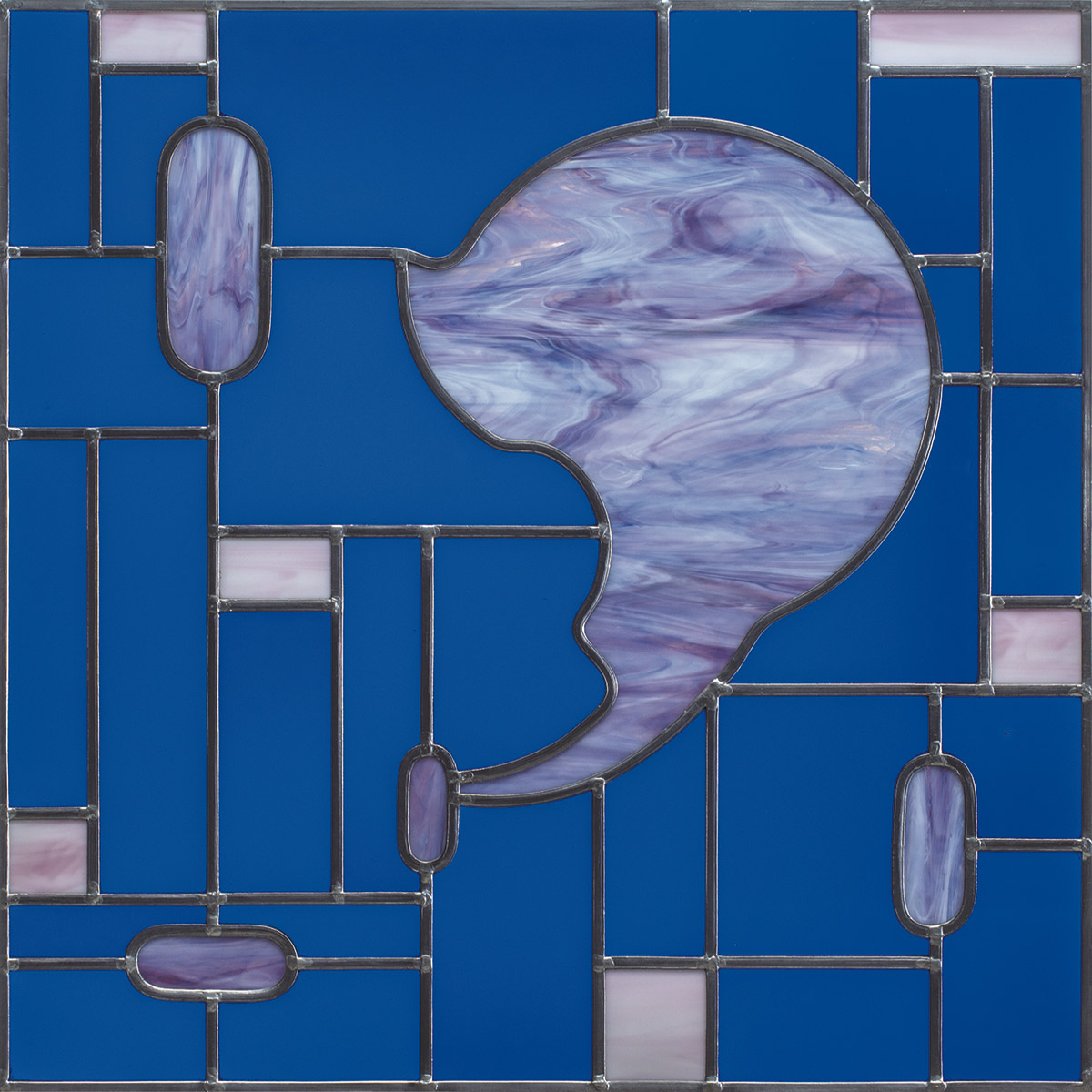 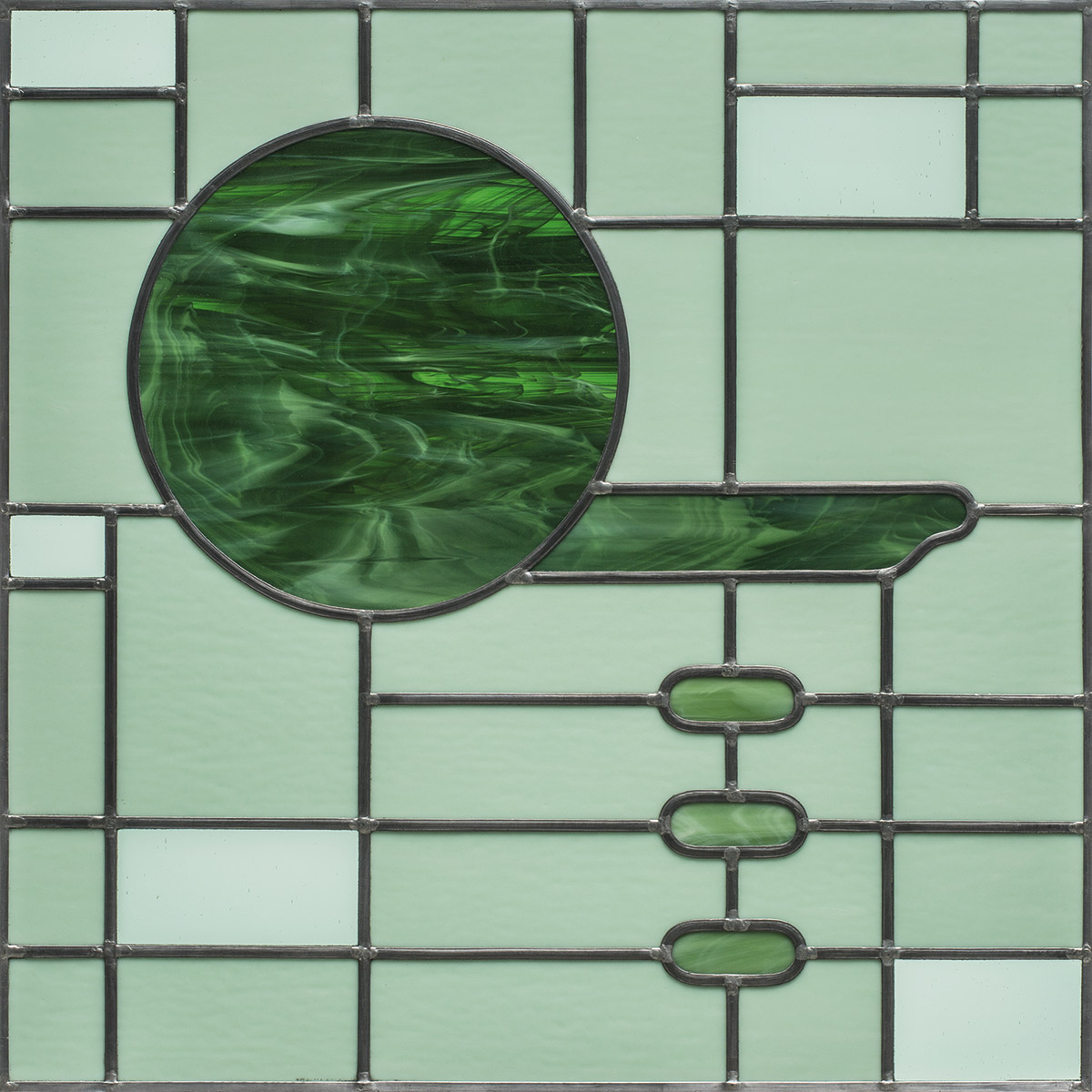 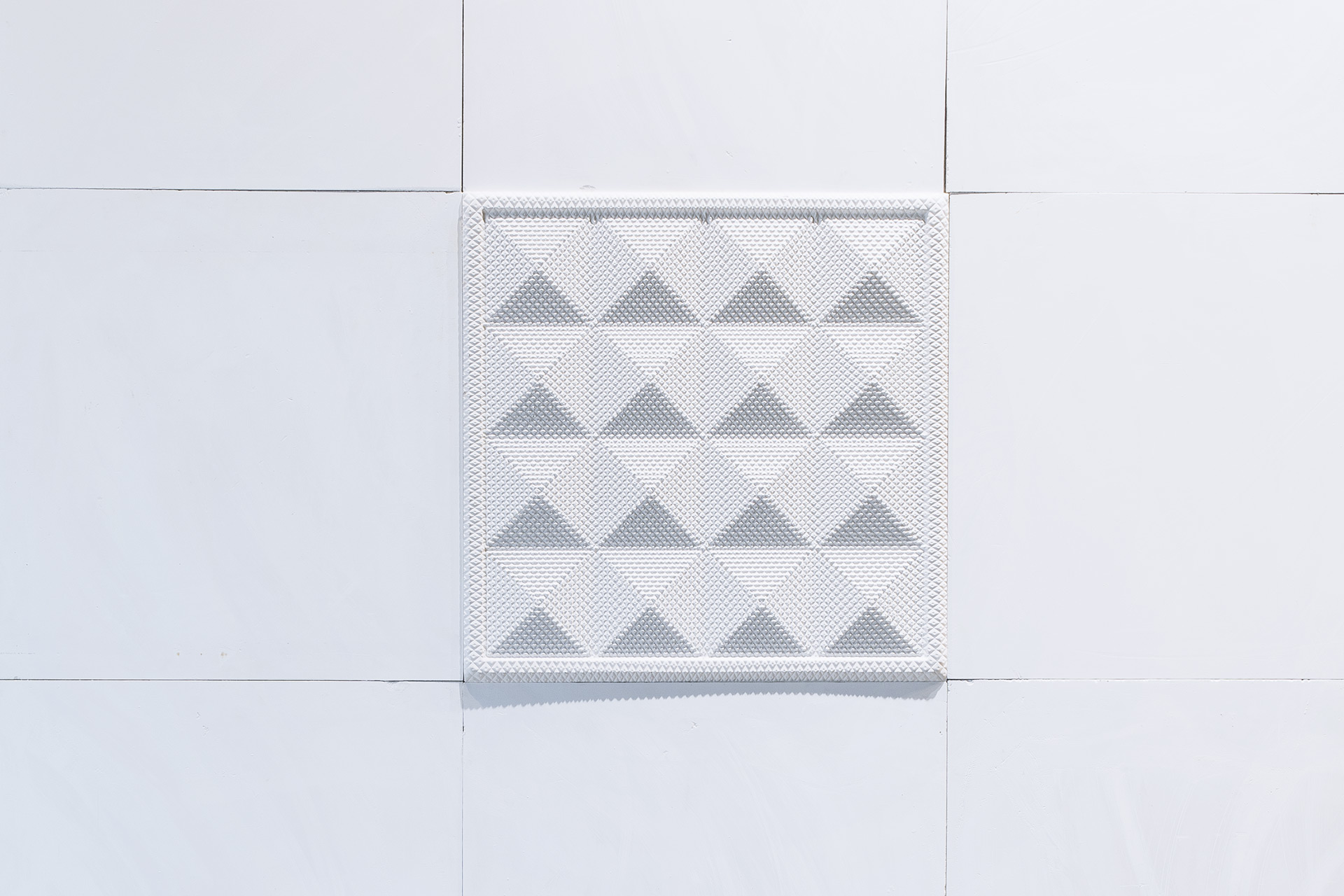 The several metres high complex house-like building, the Library of Craftsmanship, is a kind of library metaphor. Its basic structure originates from a mathematically modelled and designed framework built from square modules. Its raw material is the “clever concrete” (officially, cellular construction method): one layer of concrete enclosed within two glassy gypsum sheets. The building faithfully follows the technology transmitted by Sámsondi Kiss’s workmen, which evolved into a masonry technique from an ingenious modernist invention. The exhibition constellation of the Melancholy of the Discinstructed Meaning focuses on the extra conceptual meaning of the raw material.

The surface displays the pyramidal grid print of late modernist neon light fixtures, and the stained-glass windows resembling abstract shapes, which were designed by the artist, are pseudo products of crafts reinterpreted in the conceptual space. 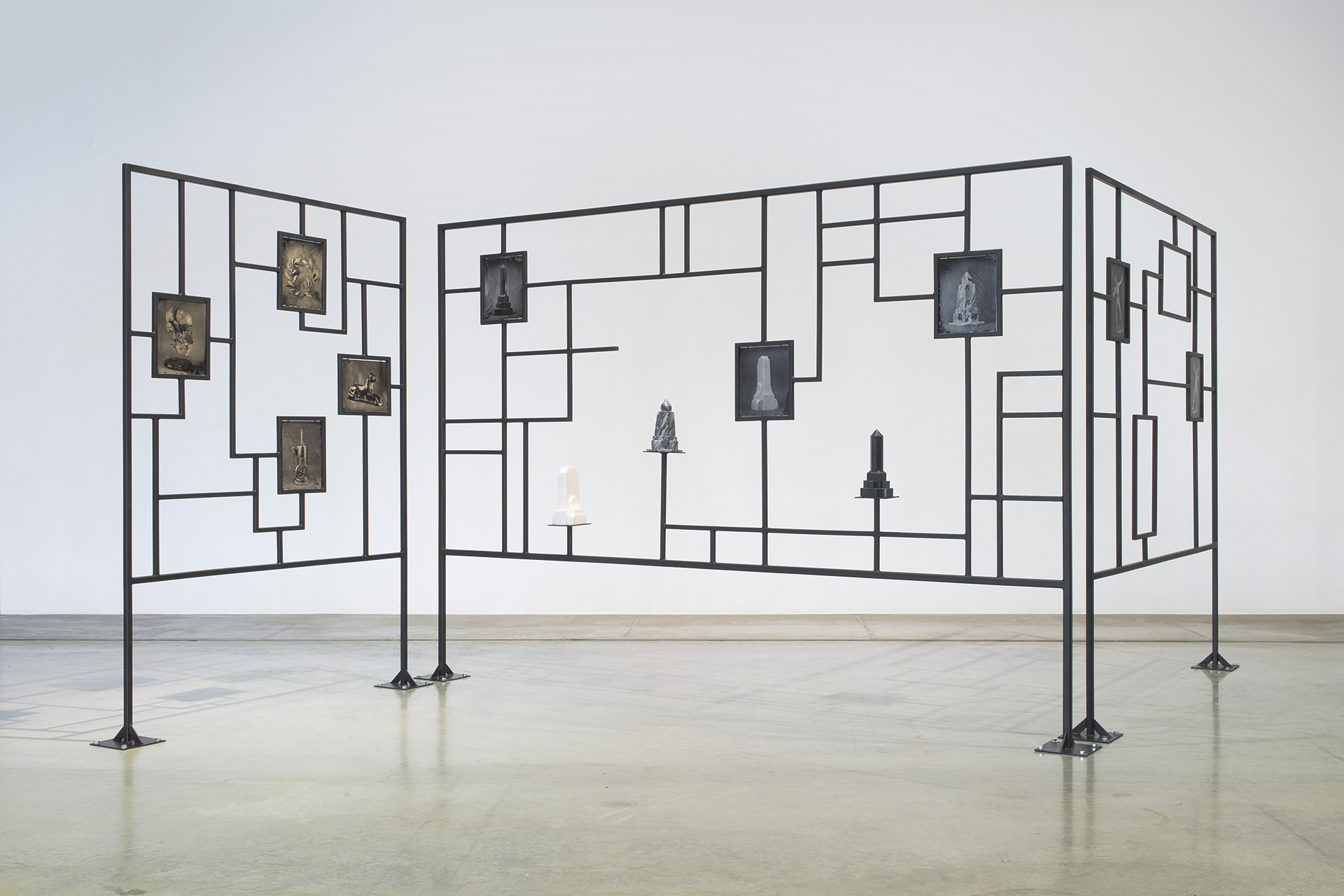 The two large installations are complemented by three metal frames (Folding screen I-III) welded from square sections. The geometric frame structures sectioned by battens, which recall the order of Adolf Loos’s geometric early modernism, display ambrotypes and marble objects. The ambrotypes, created using the classic process, display found objects, visual aids used for anatomy studies, and marble objects, creating a false, pseudo-vintage aesthetic milieu. The gypsum casts serving as visual aids at the academy and the blank miniature monuments made up of schematic geometric elements project the symbolic system of power representation to the illustrational framework of a conceptual “notice board”. 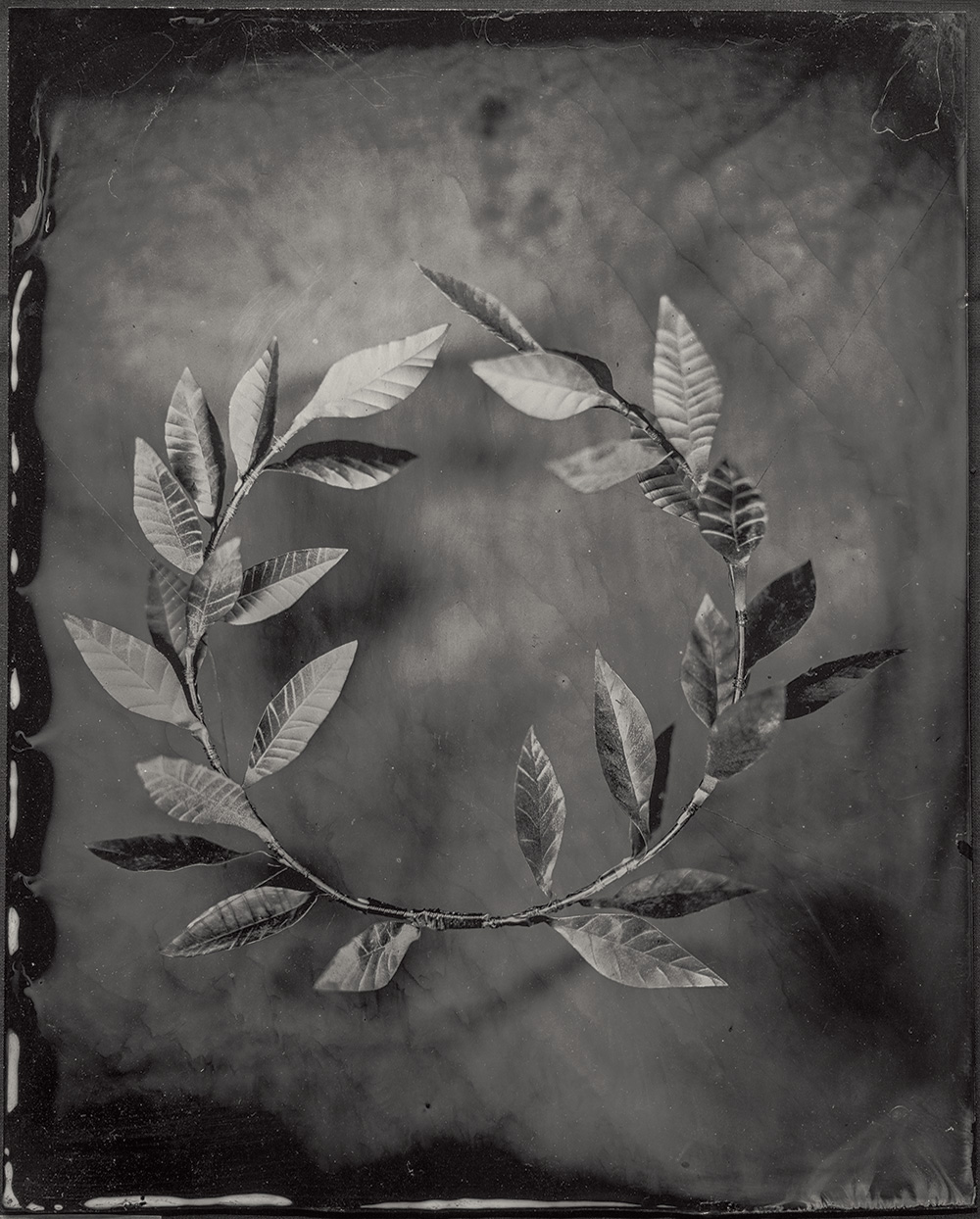 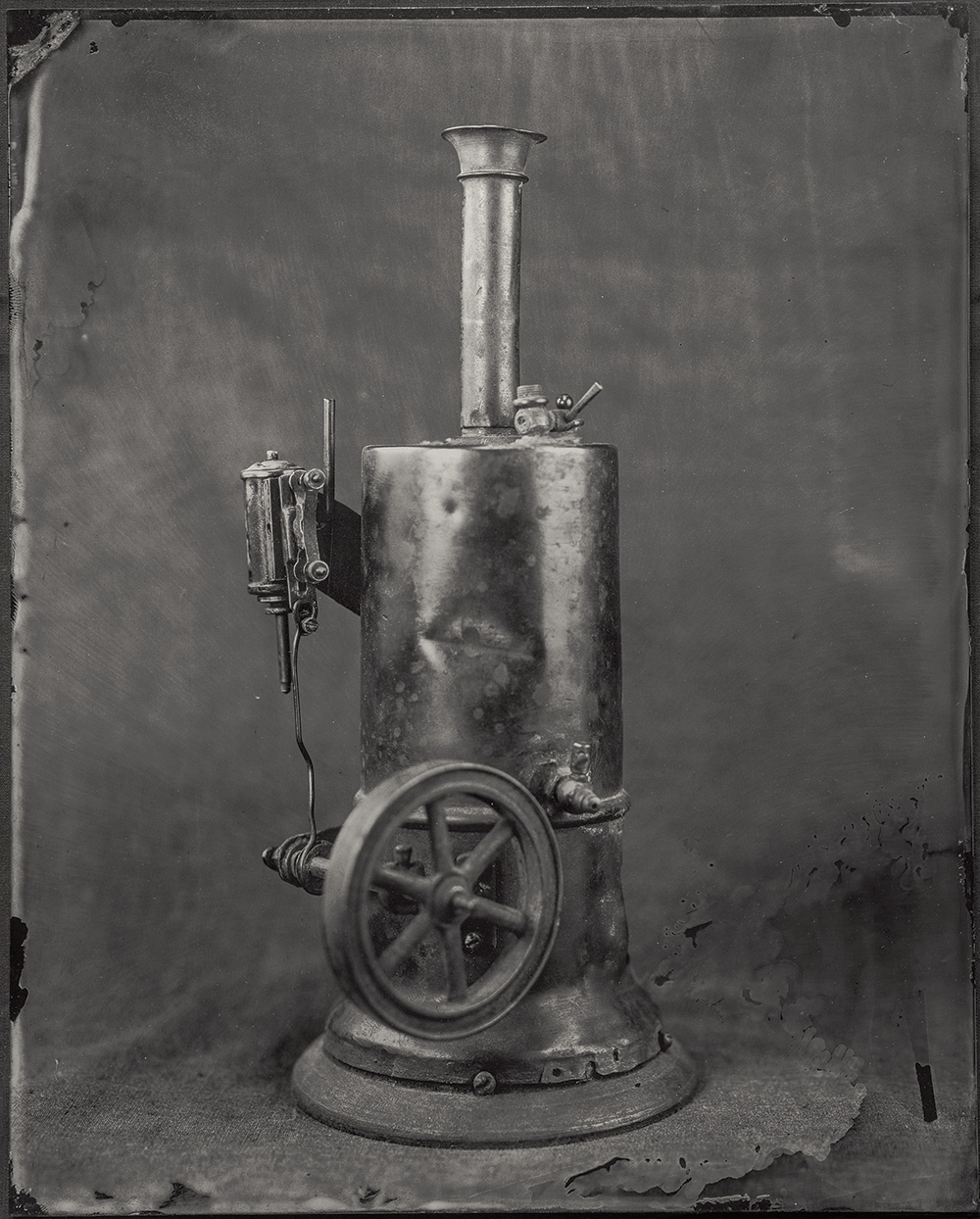 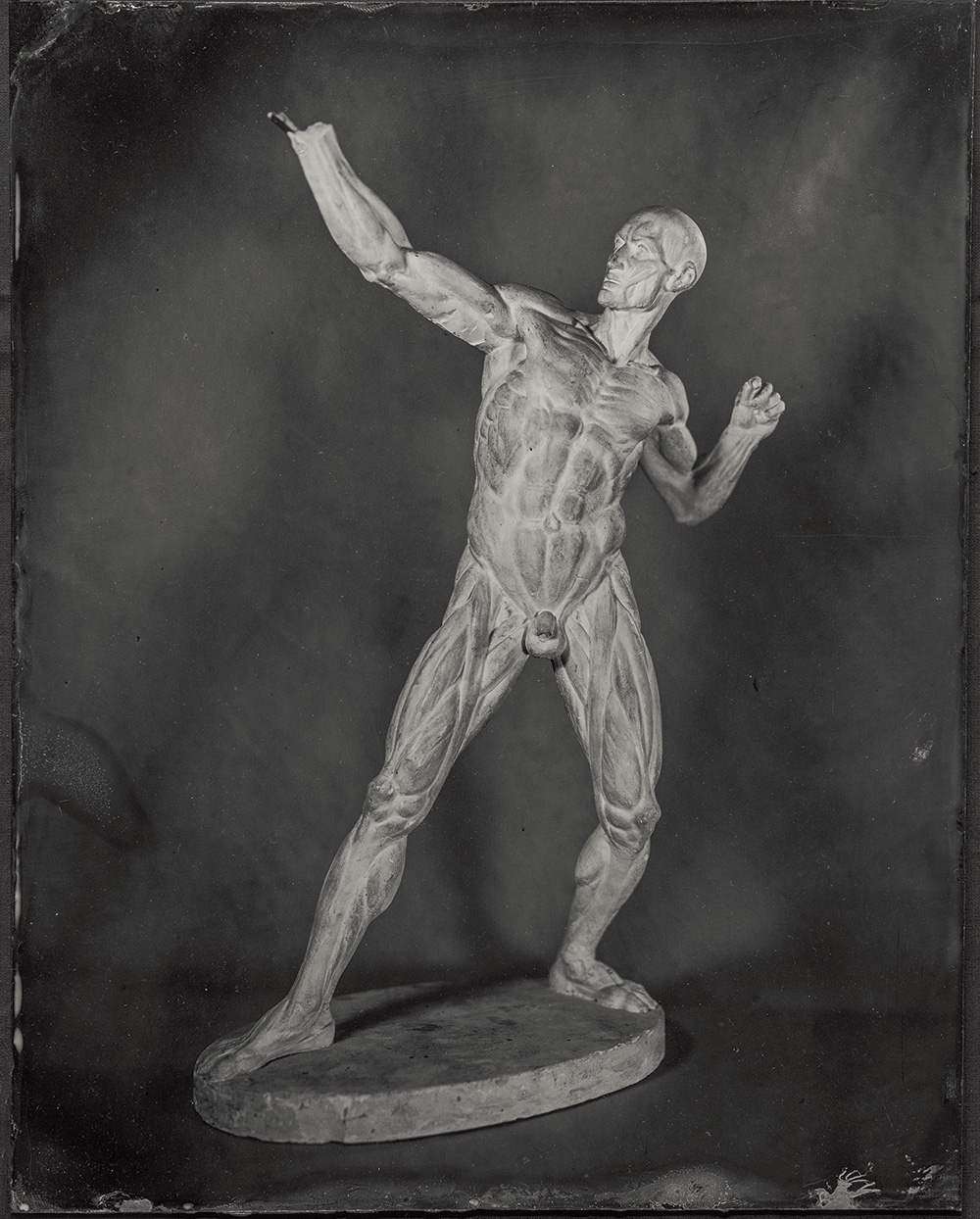 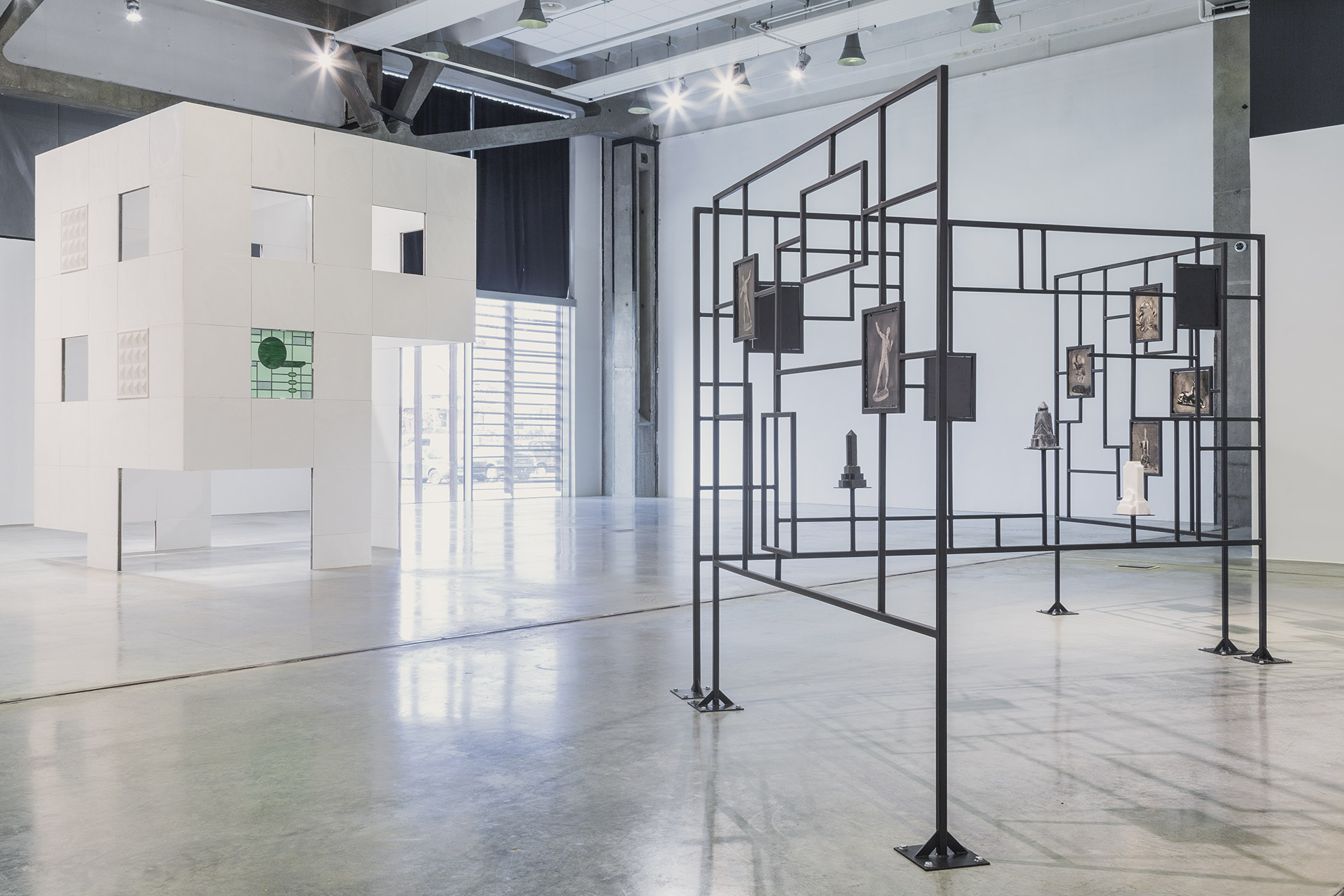 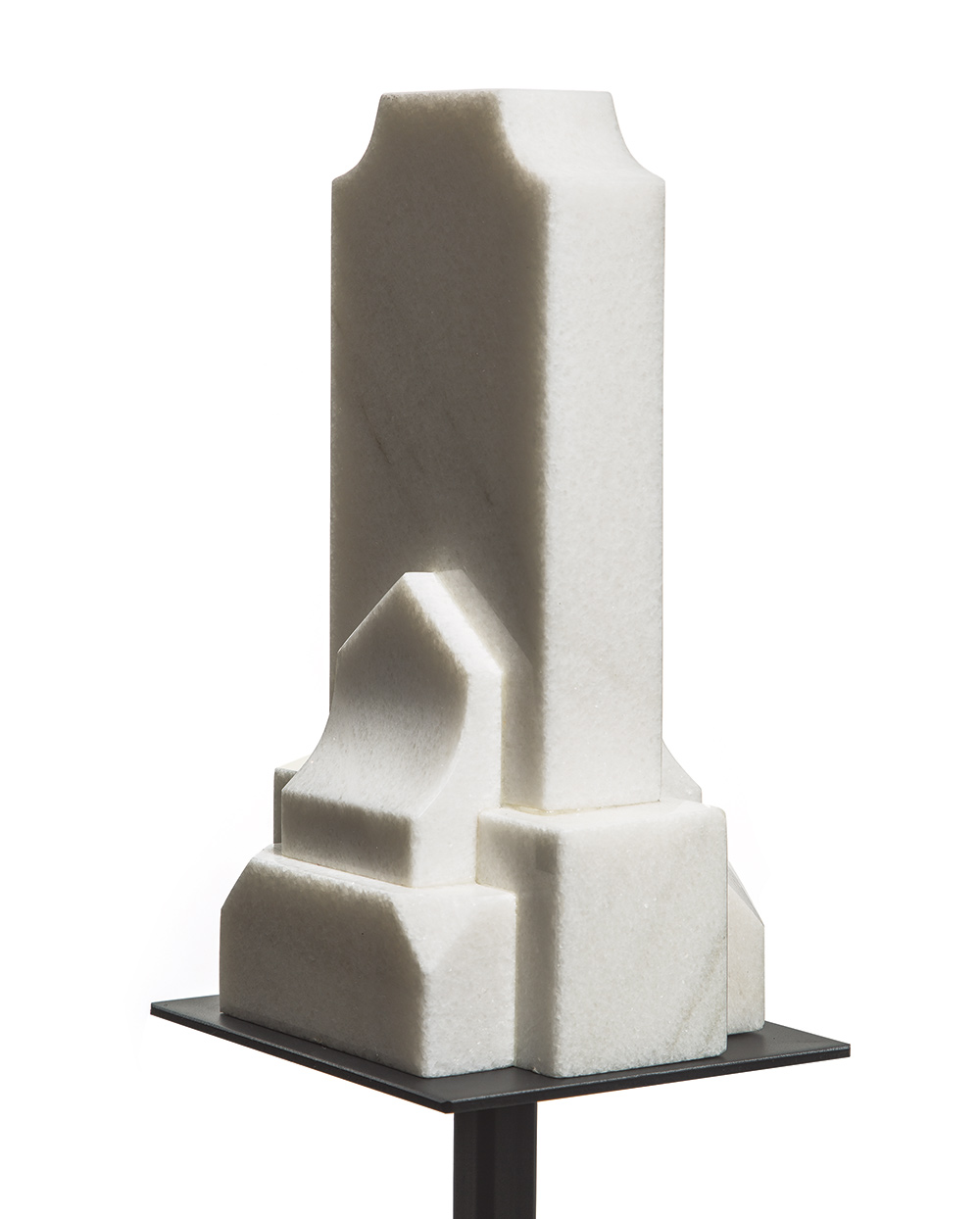 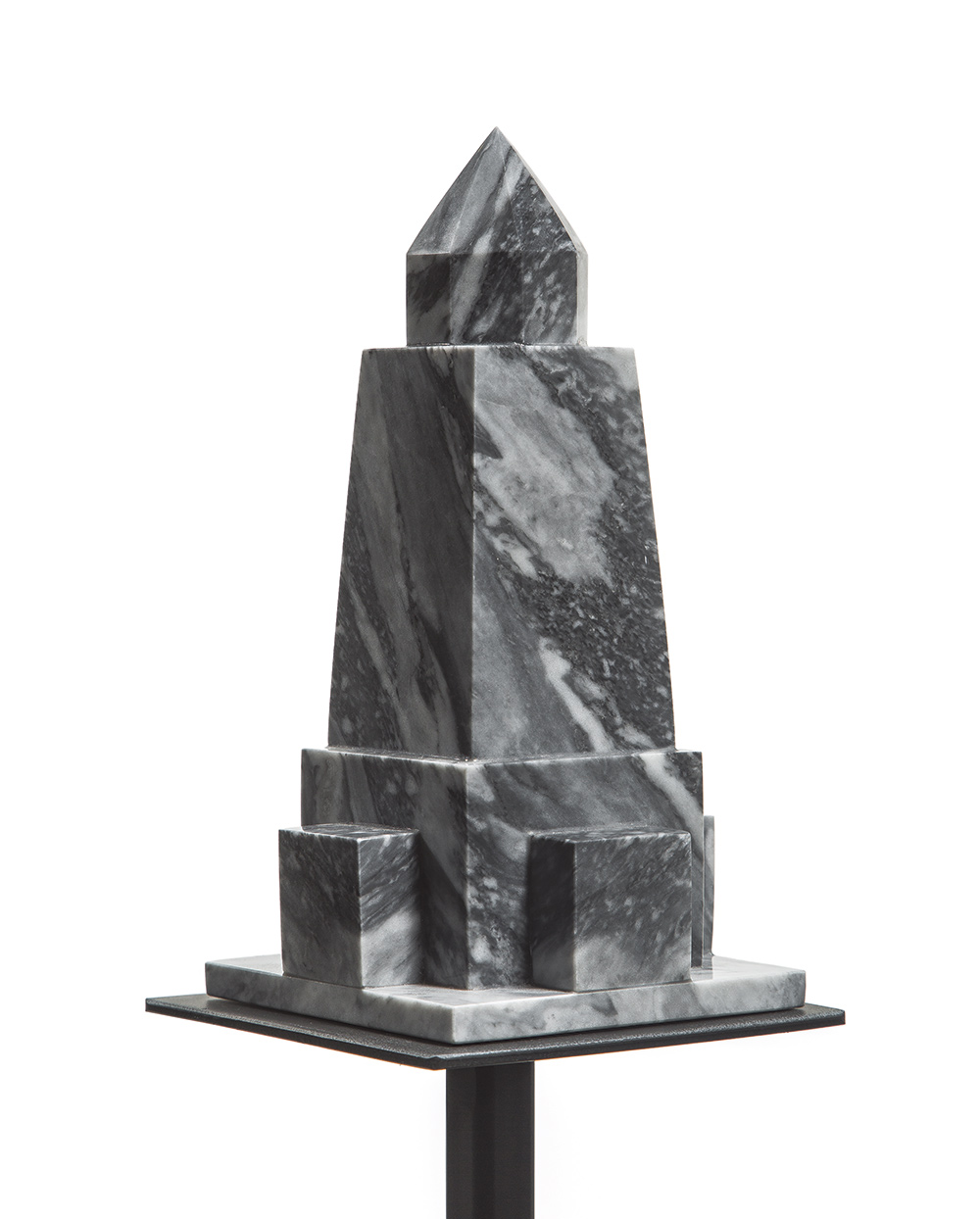 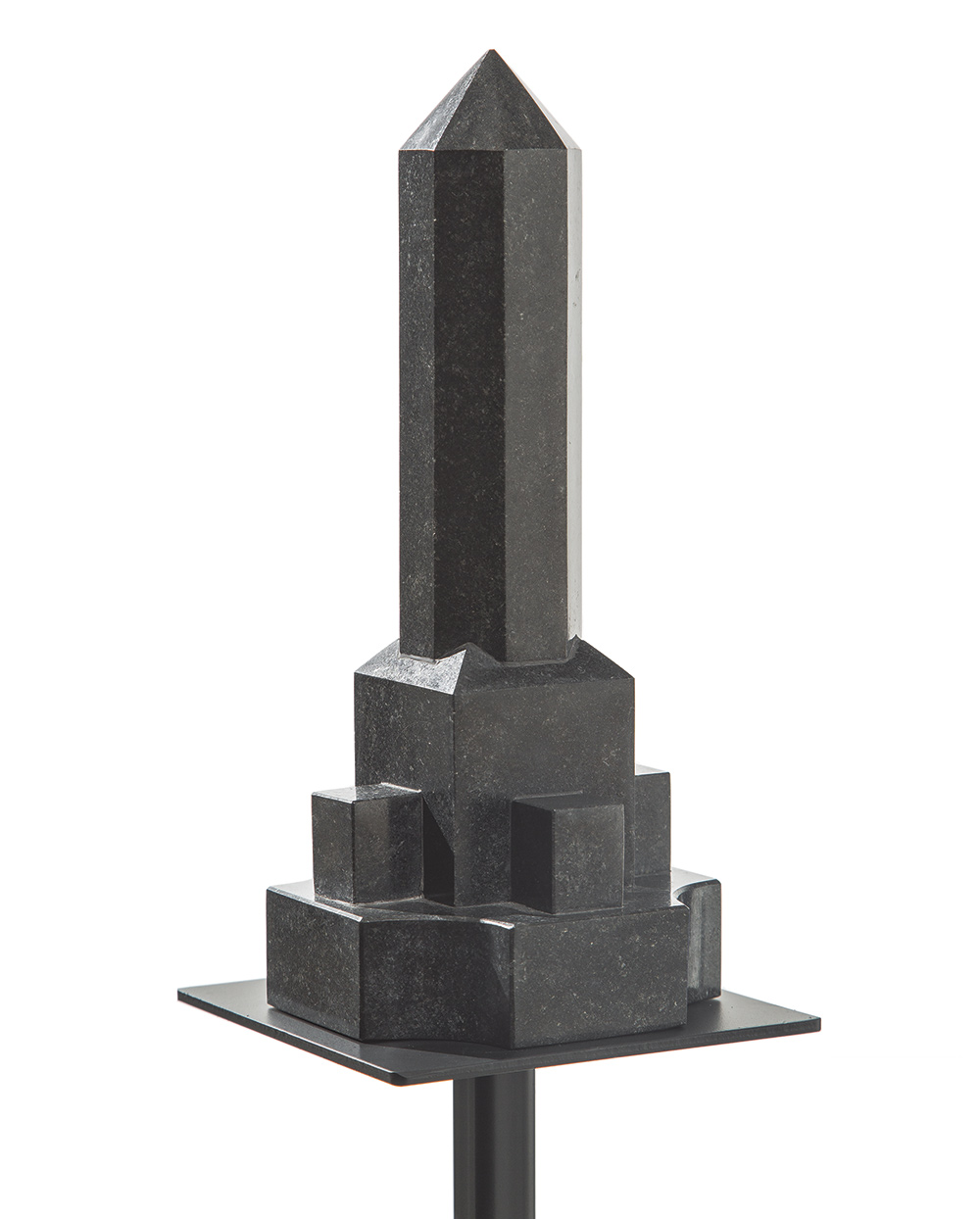 Dream of a Barn Owl

Budapest’s Kisterem Gallery is proud to present the latest works by Ádám Albert in an exhibition titled Dream of a Barn Owl, which runs in parallel with – and is closely related to – his one-man show in Paks Picture Gallery, Melancholy of the Disconstructed Meaning.

Even a common barn owl (Tyto alba) can have a dream. Sweeping silently through the soft, warm darkness of a night-time motorway, it was suddenly blinded by a flood of light, cast by the fog lamps of an approaching truck. A flash, a loud thud, and it flails helplessly in mid-air. Some time later, now filled with fixing pins, it regains consciousness in a formaldehyde-filled container in a taxidermist’s studio. It didn’t even blink, only squinted with its jet black button eyes, peering from the middle of the uncannily white face-like patch on the front of its head. It holds its wings outstretched as though about to take off, to soar away into an alternative twentieth-century parallel history, in which events turned out somewhat differently, in which clever concrete (a cellular construction method), a Hungarian invention much acclaimed by Bauhaus architects, became a world-famous, modernist building material, even convincing Khrushchev to have it mass produced in his Soviet home-making factories, treating it as the Eastern Bloc’s retort to the utterly different and infinitely attractive dream kitchens in the garden cities of America. The barn owl, the common barn owl (Tyto alba), dreams of success and celebrity, flexing its wings even as twilight slowly comes around, while in the studio, the shadows of the anatomical plaster casts and other items lined up on the shelves grow longer and longer, the shelves themselves utter charming creaks, and the final rays of the sun, as it sinks behind the neighbouring houses, twinkle off the edges of the brightly coloured stone and glass tiles. Even an owl, a common barn owl (Tyto alba), can have a dream. 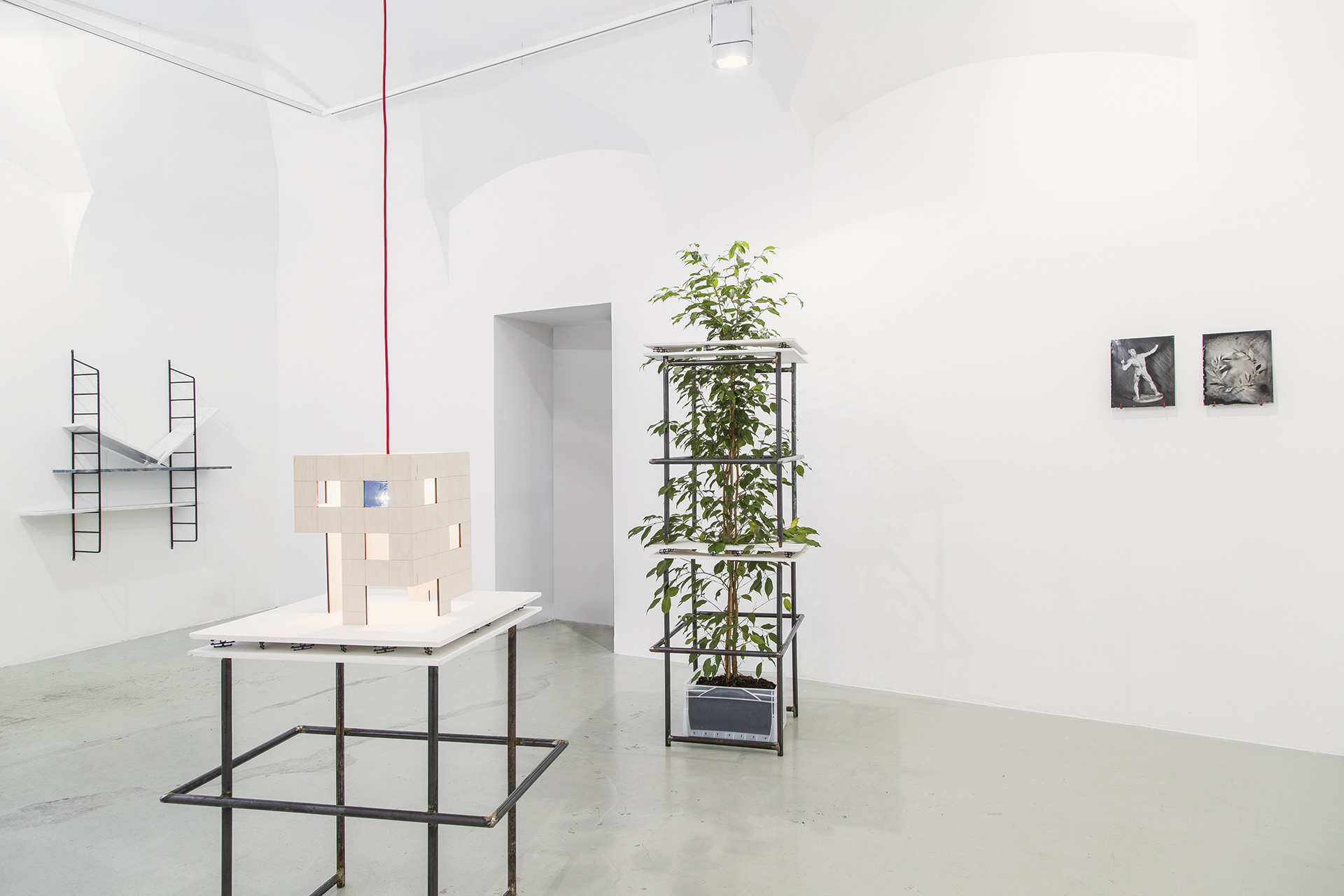 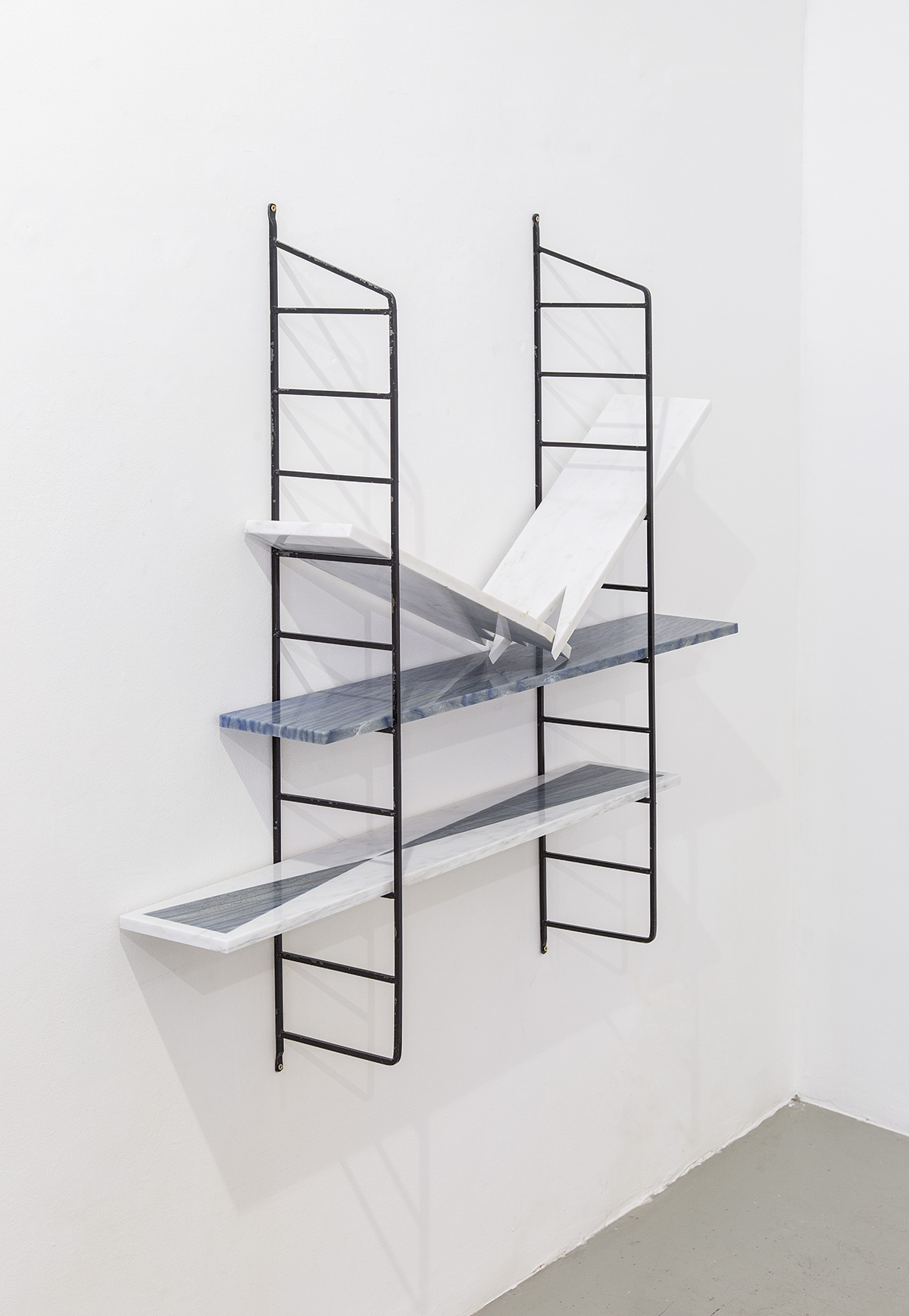 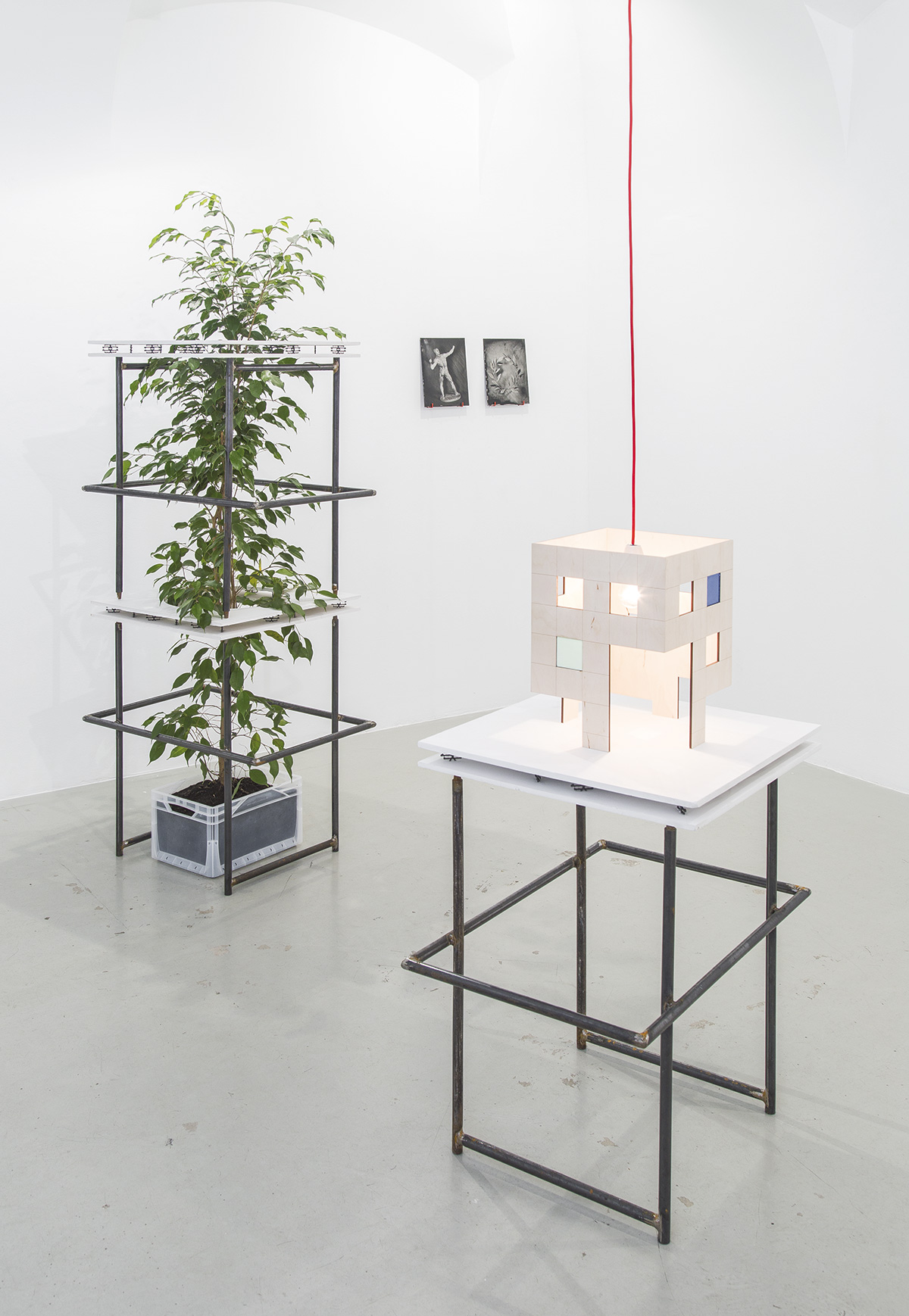 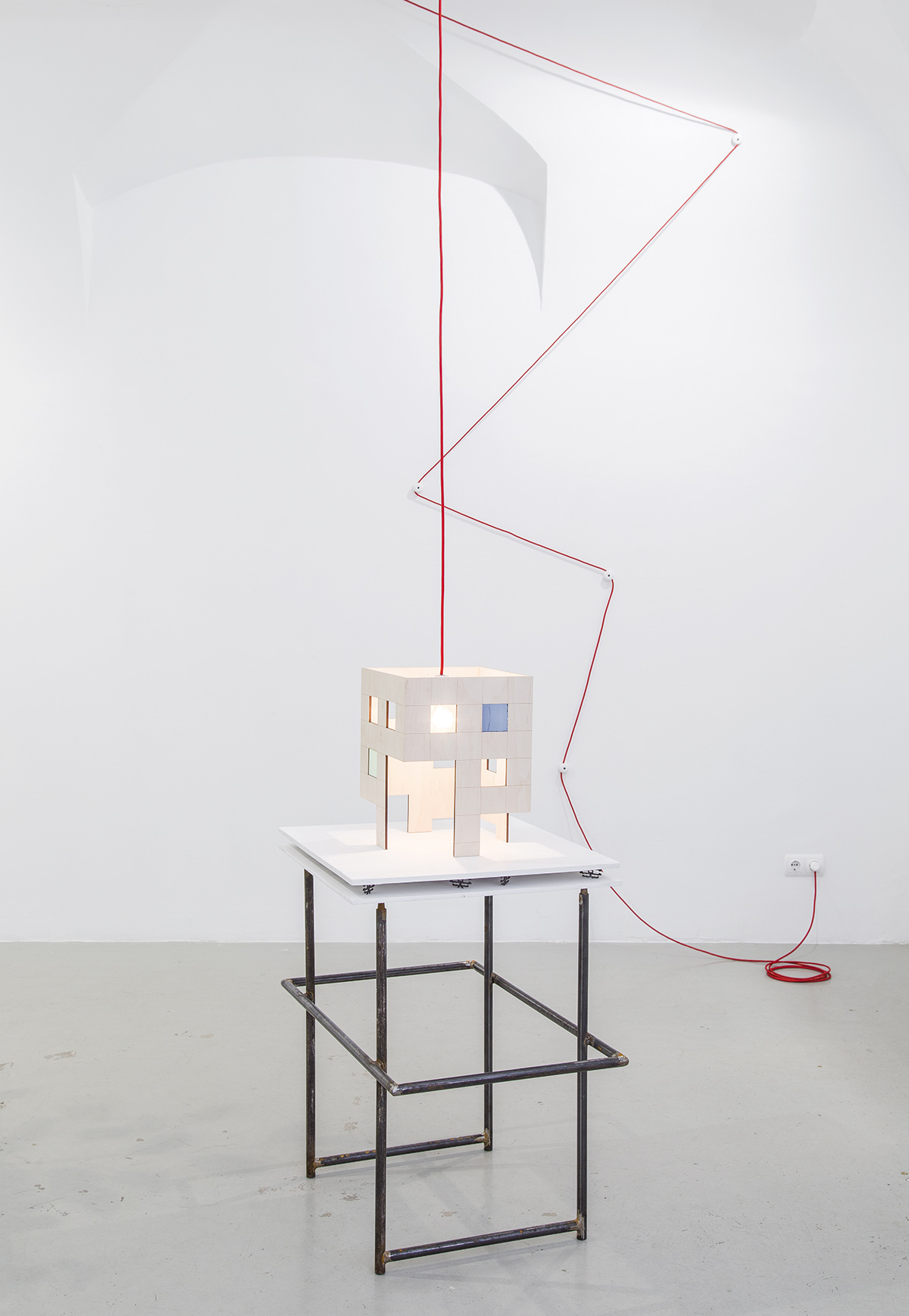 The narrative of Ádám Albert’s latest exhibition is related through the mouth of a stuffed and mounted barn owl that was found dead by the side of a road (Nightwatch of Anxiety #1, 2017), and it weaves together threads that are both historical and personal. Béla Sámsondi Kiss, the architectural engineer who invented “clever concrete” (a durable construction material in which concrete is poured into a plasterboard negative and then allowed to set), died in 1972, three years before the birth of Ádám Albert, the nephew of István Szövényi, who happened to be one of Sámsondi Kiss’s most faithful pupils. The engineer’s death came thirty years after his modernist invention was praised in the pages of the architectural magazine Híd, in an article written by the eminent former Bauhaus student Farkas Molnár. It was also just a few years after György Jovánovics, the emblematic sculptor of Hungary’s neo-avant-garde generation, first discovered the lyrical beauty (and pop-art appeal) in a solidified bag of plaster. In the late 1950s and early 1960s, when the Hungarian state embarked on a massive programme of building affordable, modern housing, Sámsondi Kiss’s “clever concrete” would easily have had the upper hand over the prefabricated panels that were actually used. There were even a few experiments carried out using the Hungarian invention, which would have been the perfect material for fulfilling the social mission embodied by modernism. Instead, the technique was passed on by only a handful of masons, although it also helped to sow the seeds of progressive art and architecture (the architect Péter Janesch presented the work of Béla Sámsondi Kiss to his international colleagues at the Architecture Biennial in 2004). István Szövényi, Sámsondi Kiss’s student, worked for the industrial design company IPARTERV, whose exhibition hall “gave birth to” the Hungarian neo-avant-garde; later he worked for the Budapest Association of the Construction Materials Industry, whose many innovations included Miklós Erdély’s invention of mural photo-mosaics. The studio apartment of Erdély and Jovánovics was designed by István Szövényi, and he thus unwittingly left his mark on the history of contemporary Hungarian art. 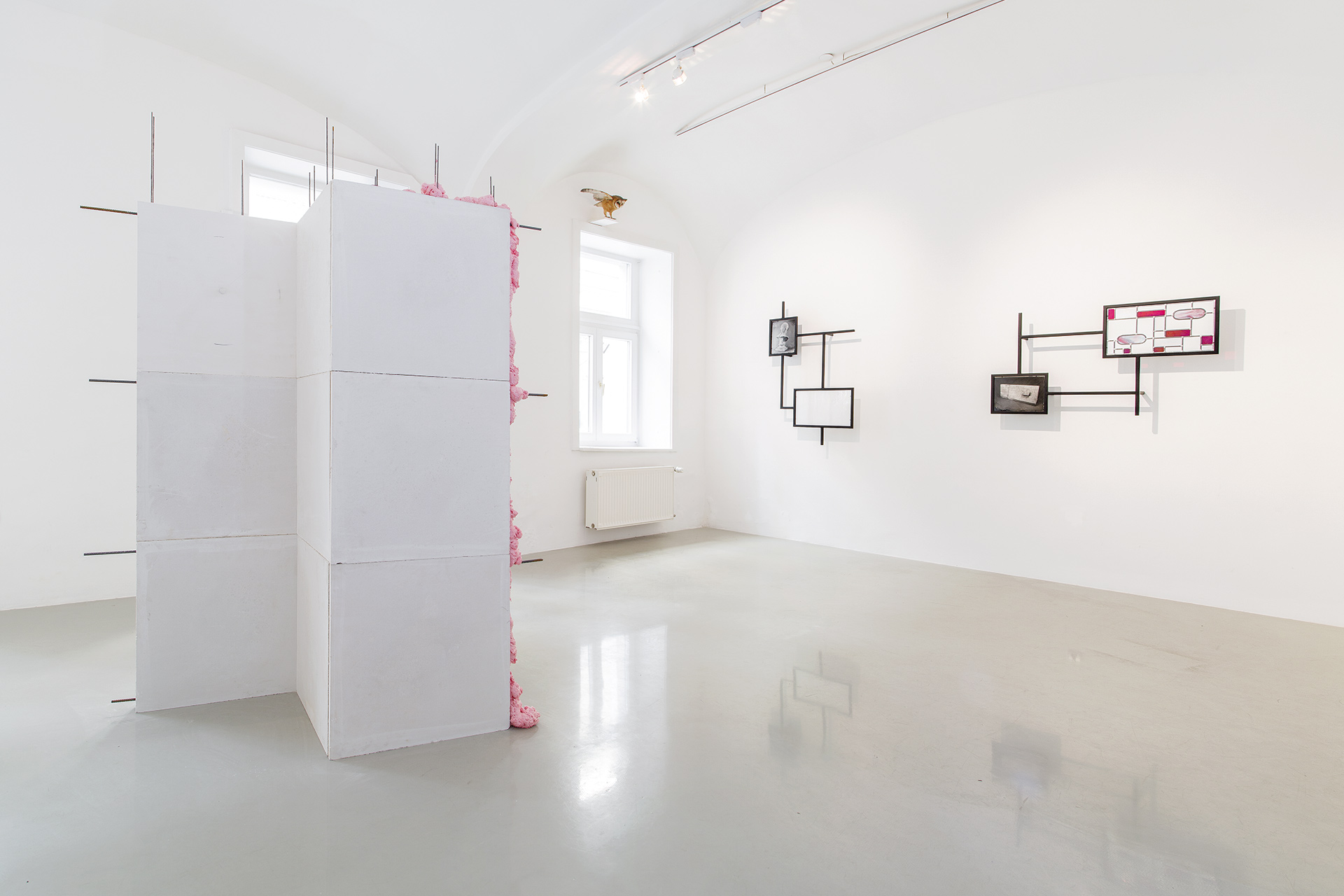 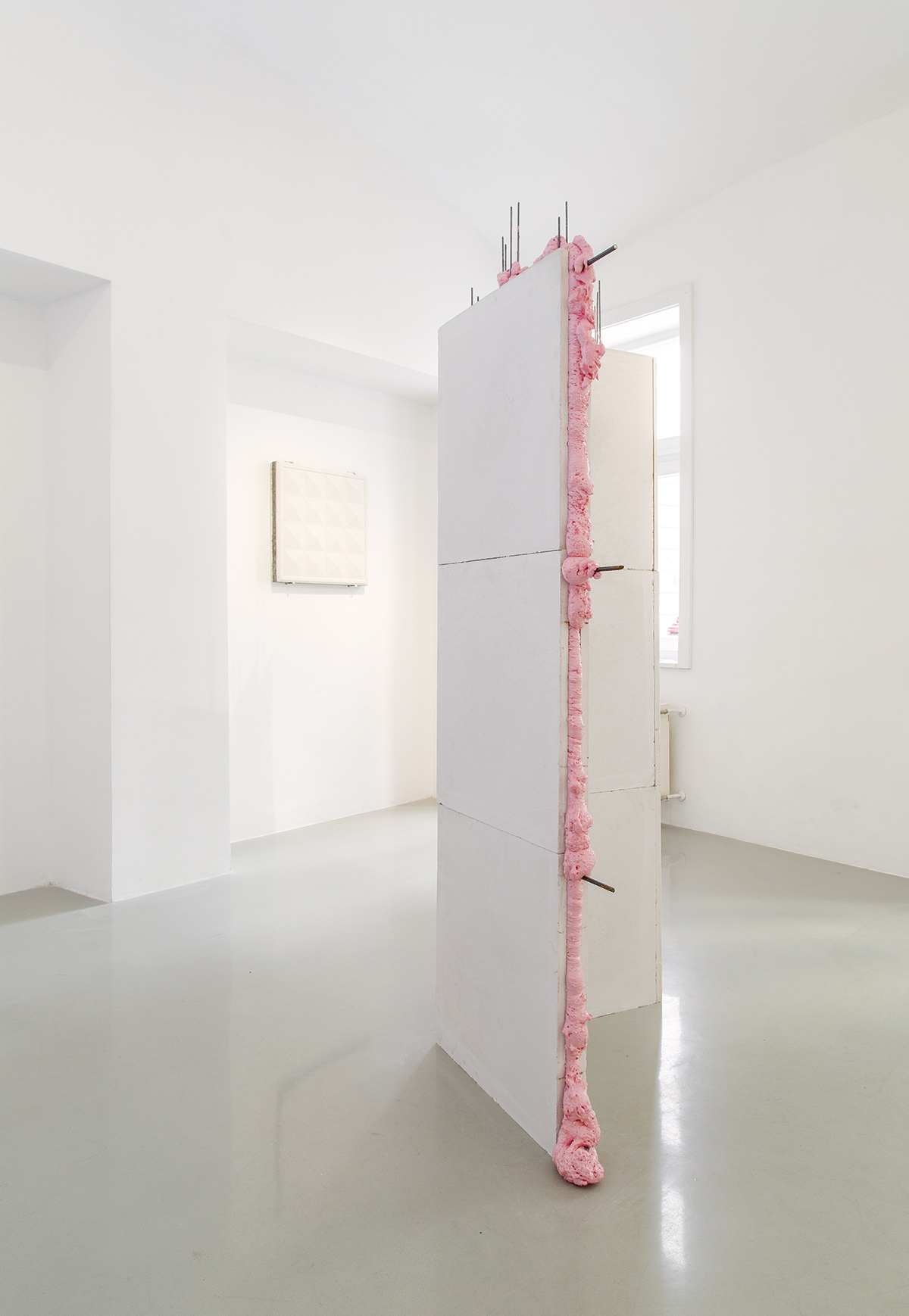 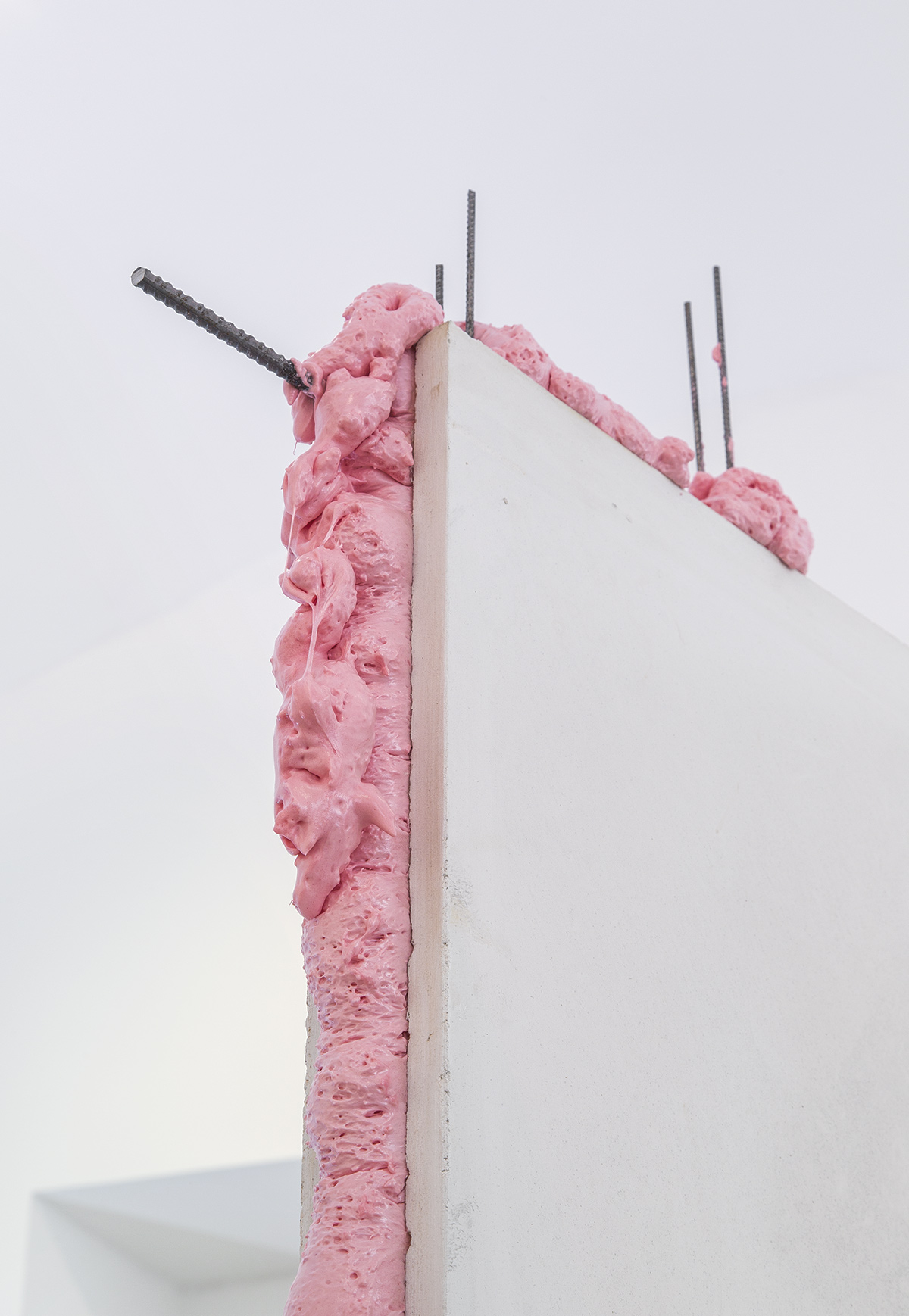 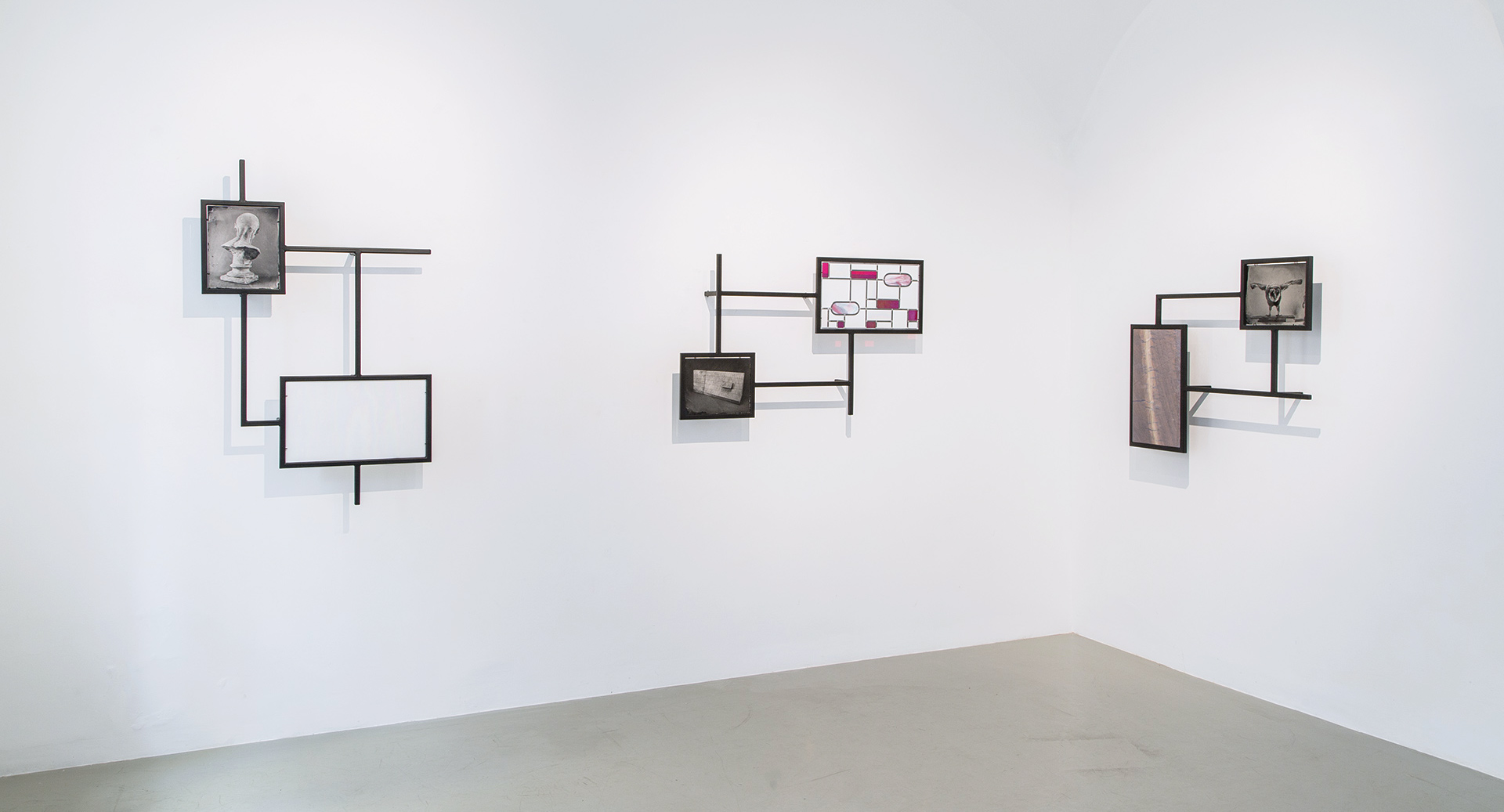 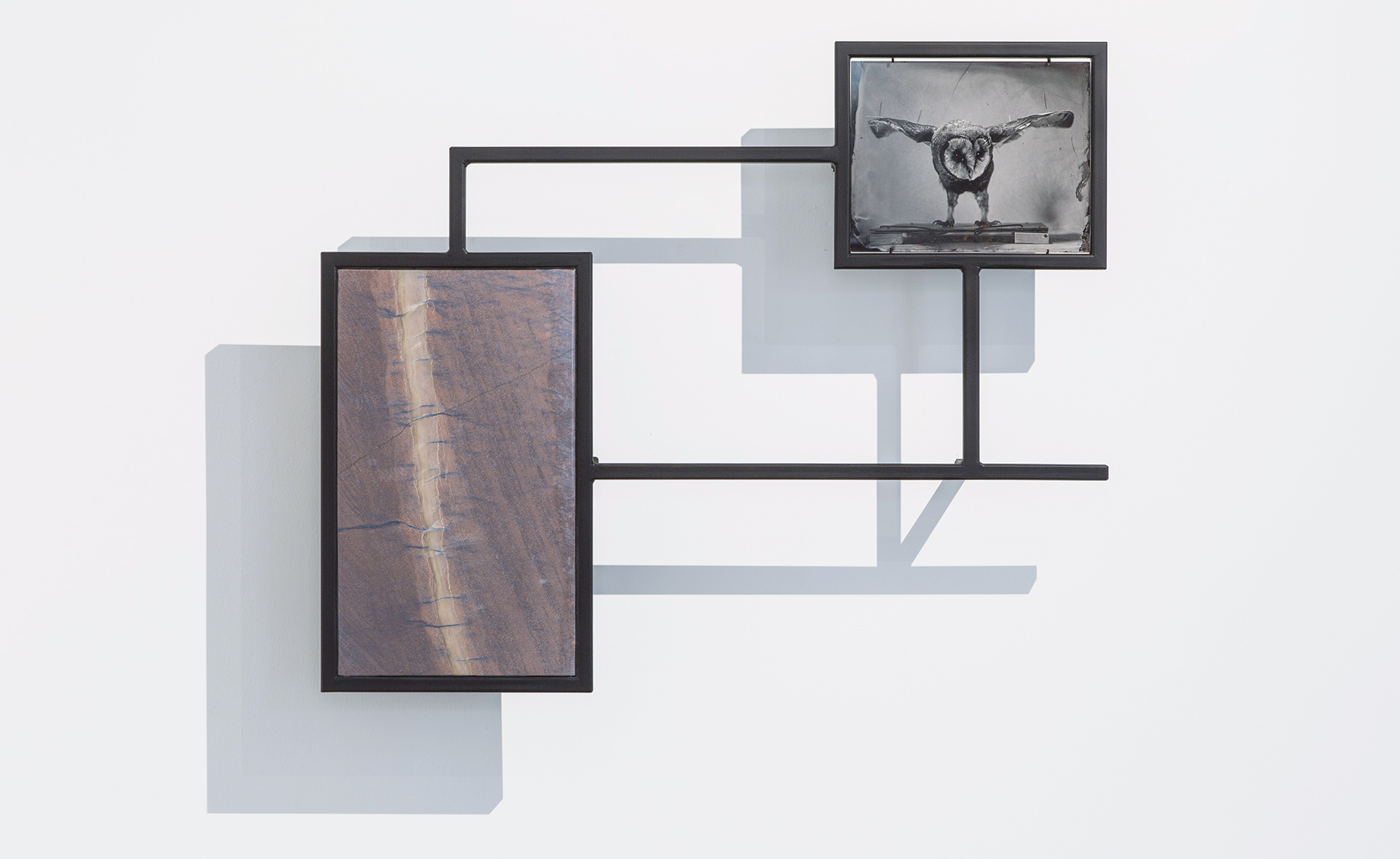 Ádám Albert delved into this wide-ranging cultural, historical and personal subject matter when he began to conduct his own experiments into what could be done with “clever concrete”, transplanting this modernist invention into the fertile grounds of an even broader technological-cum-handicraft tradition. Using the technique of “clever concrete” he recently produced an enormous installation in Paks Picture Gallery (Library of Craftsmanships, 2017), a miniaturised mock-up of which appears in the Kisterem Gallery, standing on one of the items of pseudo furniture constructed of metal frames supporting pairs of plasterboard negatives (Home Sweet Home, 2017). The interior-like ensemble is complemented by a carved marble, faux modernist, broken bookshelf (Flat-Packed Landscape (Vanishing point), 2016), as well as ambrotypes (collodion positives) of an anatomical muscular model (Plaster Modulor, 2016) and a copper laurel wreath (Victory, 2016). In the second room, Ádám Albert has constructed a “folding screen” out of plaster panels, with part of its surface decorated with a pyramidal pattern (Boudoir, 2017). Some of the 60 × 60 cm “clever concrete” modules used to make the screen have instead been hung on the wall, transubstantiated into “easel works” titled From the series of Non-Existing Mixed Technics (2016–2017). On the walls around the screen, iron structures fitted with colourful stone insets or abstract leaded glass windows bring the exhibition into thematic unity; each of these frames also features an ambrotype inset: one is of a plaster bust facing away from the viewer (SKB, 2017), another shows a study of a distorted wall (Twisted wall, 2017), while the third is a portrait of the stuffed and mounted barn owl (Nightwatch of Anxiety #2, 2017). The closing item, the actual stuffed owl preparing to take flight (Nightwatch of Anxiety #1, 2017), is the metaphorical narrator of the exhibition, observing the diverse set of works from a high vantage point, fully aware that it is through weaving together different techniques, inventions and means of expression, and through embedding them in history, that meaning comes to life, mutates and expires. 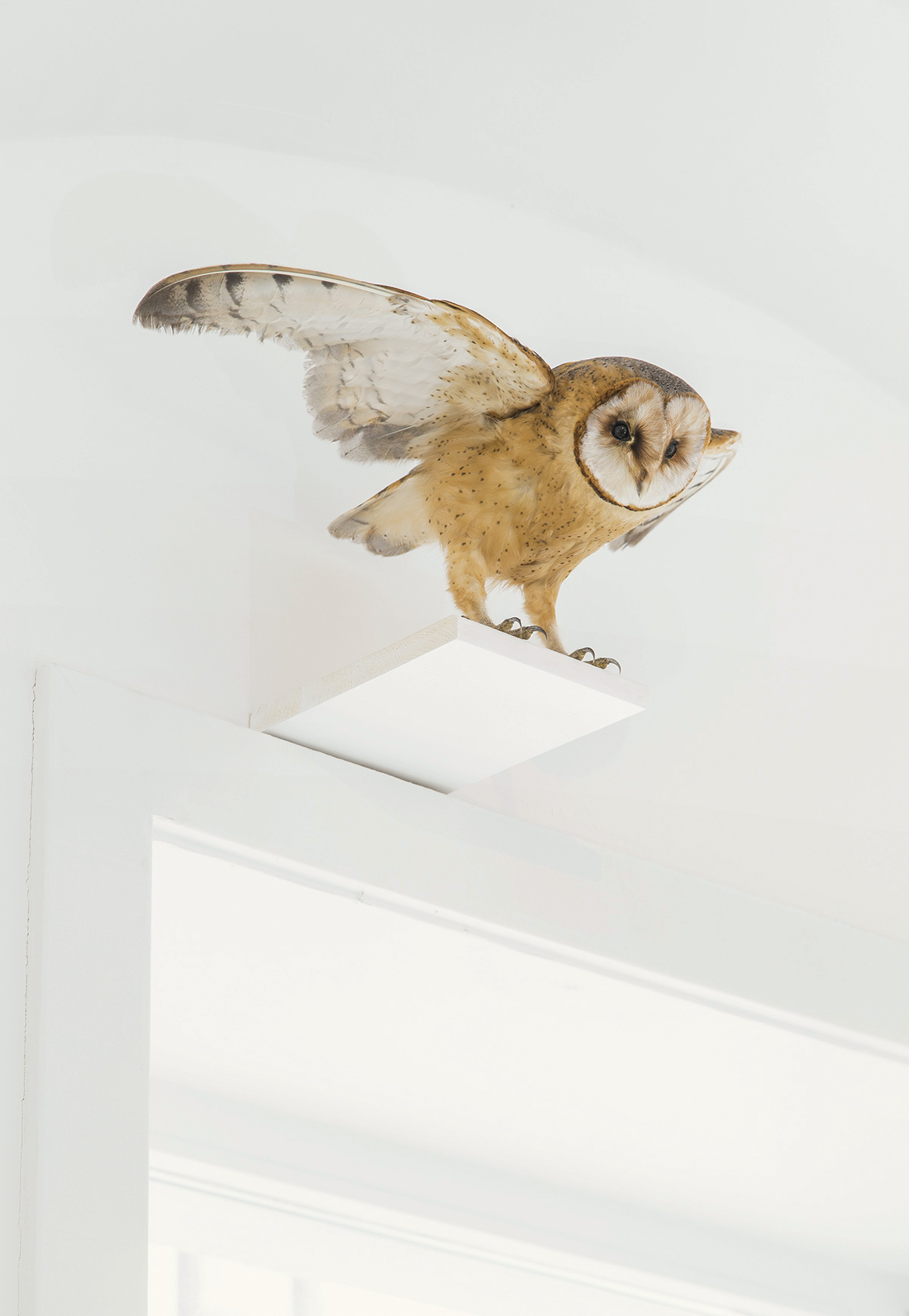